At Paradise Circus we try our hardest to compete for web clicks, and we’ve noticed that glowing reviews of bars in the city centre must go down well considering how many the Evening Mail publish online. What time and when did we send Danny Smith to get all ‘wow Brum’ at a boozer? Erm, we’ll tell you after these messages.

There is certain received wisdom in the pub industry, ways of doing things that can’t be deviated from. Edicts not learnt from working behind the bars, on doors, or in cellars every night, but from spreadsheets, focus groups, and uninspired middle management types. These are things that a successful pub must do to survive. Chiselled into laminated handbooks and handed down from on high to chain pubs up and down the country. They are:

Thou Shalt Always Serve Food – the gross profit on food is normally a huge amount more than can be made on drinks alone (unless you’re stinging people on cocktails but that scam is for another column). Also if someone orders food their stay is going to be a lot longer, which means more drinks sold. The bar is already classed as a food preparation area the same as any kitchen so serving food needs to be so the paperwork is already done.

Thou Shalt Always Cater To Families – families are money walking through the door. Drinks, particularly the huge mark up on kids drinks, more food, and the fact that larger family groups are an incredible pain to move once settled which means they stay for hours. Families bring in the cash, so the regulars are being told not to shout “oi cuntychops” across the pub, or spend time grumbling at the sheer affront of not being able to use the play equipment naked for a dare*. Regulars buy the cheapest beer and haggle over the price of peanuts like it was a market in Marrakesh, they do not bring the cash.

Thou Shalt Always Have Wifi – how else can you attract the panini-buying, expensive coffee drinking ‘digital nomad’ type without guaranteeing friction-less internet access?

“But won’t this turn all pubs into coffee house bland, cream wallpaper, bore holes with identical menus, music, and zero atmosphere?” I hear you ask, and you’re right it can, will, and has. Gentrification of our culture is inevitable when profit is our only goal.

“Is there a point to all of this one that preferably relates to Birmingham and has either a bad pun underpinning it or finishes on a dick joke?” I hear my editors ask, and yes, in a bit, leave me alone.

You can imagine how warming it was to my anarchist cockles when walking across town I saw a five foot A-board announcing:

“NO KIDS
NO WIFI
NO FOOD
Just Good Quality BEER!”

The pub it is obstructing the pavement outside was the once infamous Saramoons and then briefly, and bafflingly, called Hakuna Matata. Perhaps in the words of the Lion King song that means ‘no wifi’.

It’s now called The Peaky Blinder, a theme pub dedicated to the TV show of not quite the same name: you know, the wildly-inaccurate gangster period drama set in Newcastle, Liverpool and Melbourne judging by the accents that has attached itself onto the Birmingham man’s self image like the parasites that live in rats brains a stop them being scared of cats. If you haven’t made the connection there’s a massive mural outside – but those huge clues are your only ones. The windows are branded and steamy and the door window is covered in wrought iron so you can’t really see inside. This is the way things used to be, the interiors of pubs and bookies were hidden from the eyes of the public lest the glamour entice the young and weak-willed inside. 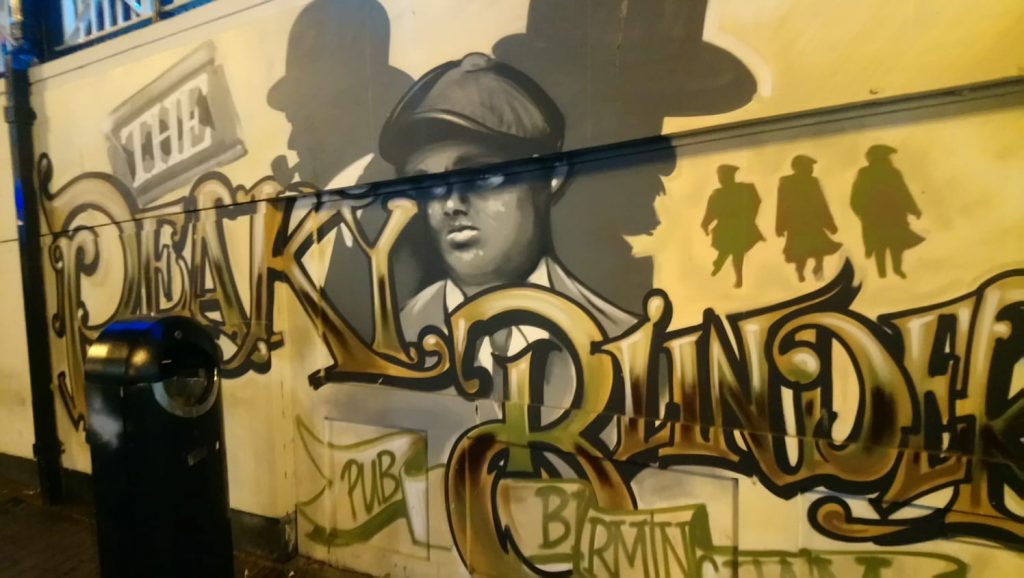 Enticed anyway, I’m in. I’m wearing jeans and leggings, make-up, and blue hair I fear I may be too anachronistic for this place, like episodes of Star Trek set on the holodeck, but I go in anyway. The record on the jukebox** doesn’t skip, but the conversation does drop a little as I’m weighed, measured, assessed and dismissed as ‘harmless weirdo’.

The pub is one room, white walls with red furniture. The walls are decorated with Peaky Blinders stuff, framed vintage pictures of the real Birmingham gang is based on, two spray-paint murals of the TV show, in each corner is a mannequin dressed in white shirt, waistcoat and flat cap. There’s a DJ booth the size of a phone booth that reaches just under the hips sat on one wall.

The barman is dressed in the same waistcoat and flat cap as the mannequin, so I am taken by surprise when one of the regulars shouts to get his attention to serve me and he comes alive to take my drinks order. I get my pint of cider and packet of ‘Porky Blinders’ scratchings and sit down. If this were a phrase, and wankers on the internet will no doubt make it so soon, the existence of ‘Porky Blinders’ would “win Birmingham”. The bar is propped up by four shaven headed men in near identical black waterproof jackets and an old boy sitting on the only stool.

It’s mid-December but in a pub clearly unafraid of decorating, the only concessions to Christmas that I can see are a couple of wreaths and a bauble hung in such a way that it makes the giant head of Cillian Murphy (I think) look like he’s got a massive bogey. 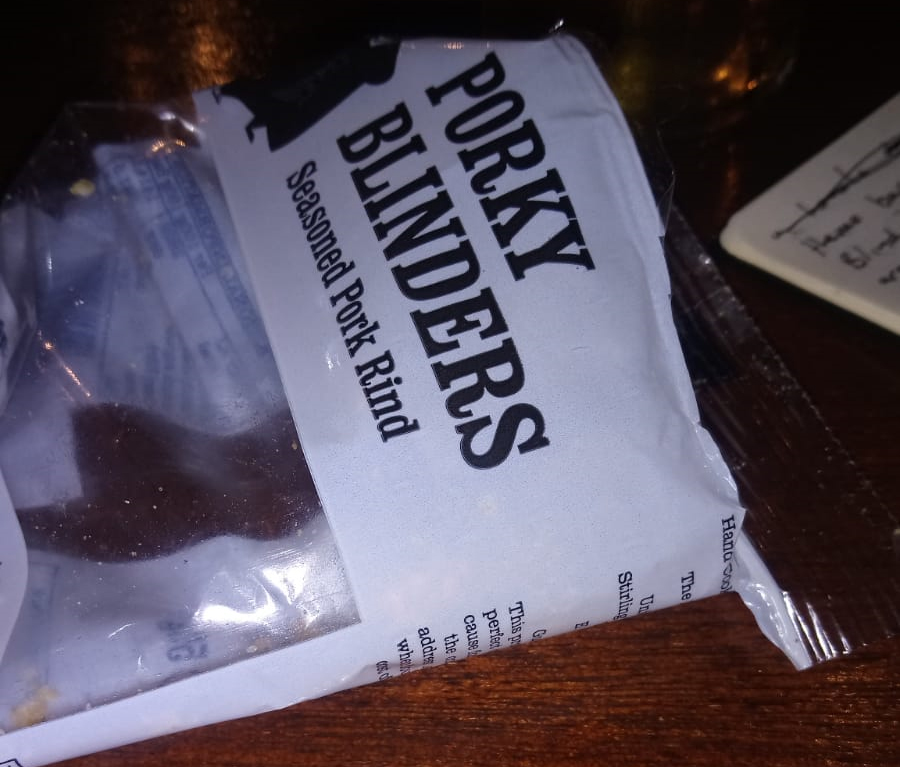 As I write, and plough through the saltiest scratchings I’ve tasted in my life more people arrive: mostly men finishing work, plain clothes security guards (you can tell by the shoes), a couple in hi-vis, a few tradesmen (carpenters, from the trousers) and some women with shopping bags. All seem to know each other, hellos are exchanged and jokes remembered. Saramoons was the sort of place you could buy your own car radio back on a Saturday afternoon. The Peaky Blinder is more than that now. It’s something you have to work for.

The decor is perhaps the least interesting thing about the pub, although it is interesting. The pub isn’t a simulacrum of the period that Peaky Blinders is set, like say an Irish Bar is a theme park version of an old real pub, this is like tumblr fan art. Not Disney World, but the bedroom of the world biggest Disney fan.

It’s a place where you’ll be dragged into a conversation by just sitting there, a place where everybody may well not know your name, but they’ll remember that you owe them a drink from a fortnight ago.

The thing about that sign outside is that in the Venn diagram of pub goers, circles of people that are attracted to “NO KIDS NO WIFI NO FOOD” and actually care about “Good Quality BEER!” don’t really overlap. These statements are a shibboleth, a statement at a frequency that only some people will hear. It means ‘this is a proper boozer’. The other thing written on the sign is “all welcome” in scare quotes. That’s because either consciously or unconsciously, nobody believes that. Kids aren’t welcome for a start. But moms groups, digital nomads, gourmet burger wowbrum cocktail snobs are, if not actually discouraged, then expected to assimilate and not try and change a community that doesn’t need or want it.

The pub featured in the TV series Peaky Blinders is called The Garrison, in the world of the peaky blinders it’s their home base, office and sanctuary all wrapped into one. It’s based on a real pub across town by the Blues ground (it got sold last year and is rumoured to be pegged for a housing development). Even though The Peaky Blinder isn’t called The Garrison, it’s perhaps fitting because the locals and the landlord of are fighting a battle, a culture war that’s being lost at a rate of three pubs a day. The open ones willing to turn themselves into family restaurants, London-lite cocktail bars and co-working spaces.

Your local is a lot of these things and should have room to be those thing for some people sure, but it shouldn’t lose sight of what it needs to be, a community of people seeking a refuge from a maelstrom of shit that exists outside its doors. Not an ‘experience’ or ‘dining adventure’ but a shared living room, a stage for stories recounted with sozzled relish, a place of impromptu Neil Diamond singalongs. A home.

Home is the place where when you have to go there, they have to take you in. The local is the only home for a lot more people we care to admit. So if this is a garrison, I’m proud to be stationed there and will be standing shoulder to shoulder with those defending it.

Danny is bored. Have you got an event he should go to? No promises he’ll turn up, or that we’ll publish anything he writes about it. But still, he’d lighten up any social event. Email us: PleaseSendDannySmith@paradisecircus.com

*Yes, this happened in a Wacky Warehouse I used to work in, the regular in question slid front-first and bollock naked down the slide, squeaking his package down and being the first man in history to give a playground an STI.

**The song is House Of The Rising Sun by the Animals by the way, it’d have been more pleasing if it had been Hotel California, but that will do.