Christmas comes but once a year, apart from for Roy Wood, who must have a terrible time getting his bins collected. Like everyone else in Brum, are we right, we’re here all week. Try the rotting fish in the black bag on the street corner. Anyway, Christmas, web clicks, we asked Danny to riff…

Birmingham changes over Christmas. The wolf of capitalism takes a long German shit right in the middle of its chest, and it’s filled with day drinkers, night shoppers, and a huge homeless population seemingly invisible to the other people. For a sensory seeking freakman like me it’s a wonderland of lights, smells, noises and human drama, but for others it’s a scary wall of people, muggers, confusion, and overload.

Since getting back I’m still not entirely sure of the bus routes and times, luckily West Midlands travelXbus has an app now. Let me just check it. 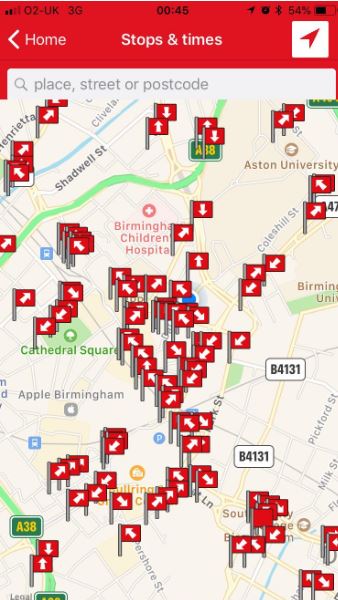 That’s cleared that up.

If you do make it into town here are the seven must sees. (Yes, I’ve written a listicle. Shut up. Your face is out of ideas.)

The icon of the defaced David 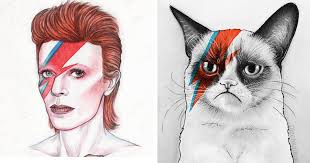 In the pantheon of person saints David Bowie will forever be the Lord of ch-ch-Changes. Bowie died two days before my birthday two years ago, soon after a tribute picture by the wonderful Annatomix appeared. A week ago some bellend ripped it. Cue much gnashing of the teeth by commentators the sort of person that would bemoan the local bus stop being tagged but can’t wait to throw some filters on what they deem ‘Street Art’. Okay it sucks that the picture was torn, but nearly three years is a long time in the graffiti world (yes graffiti, it was a legal wall and a paste-up but graffiti nonetheless.) the point of graffiti is it transient nature, for everyone, however fleetingly, to own a small part of the city your in. It is fame burning bright and brief like a poundland tree bulb. Its magic coming from the fight between the artist and the machinery of the city buffing and growing as quick as the paint going up on the walls.

And lets not forget Bowie was the master of reinvention, evolving, seeking the next thing. After three months he would have torn the poster down himself.

Slade aren’t from Birmingham, the both nasal and somehow guttural “eeeeets ceeeeerissmuuussss” can only be pinned one part of the midlands and that ain’t Birmingham. Nethertheless as any good Brummie will say when faced with something popular, famous, or successful that is no more than an hours drive away ‘we’ll have em’. So Noddy, co-writer of the classic Christmas is Bostin, is celebrated in a way that makes perfect seasonal sense. In lego.

I once interviewed Jim Lea from Slade and asked about one of my favourite songs, Far Far Away, I quoted the line “had a red light off the wrist without me even being kissed” and asked if they had actually done all the things in the song they say they have. Jim cut me off, the only time he interrupted me, “Noddy,” he said “Noddy did all those things, it’s always Noddy”.

One does not visit a shrine for the first time empty handed, so I place my offering of a couple of sachets of cup a soup at his feet, genuflect by putting my hands on my hips and rocking my shoulders backwards and forwards and hope Noddy is watching over me. 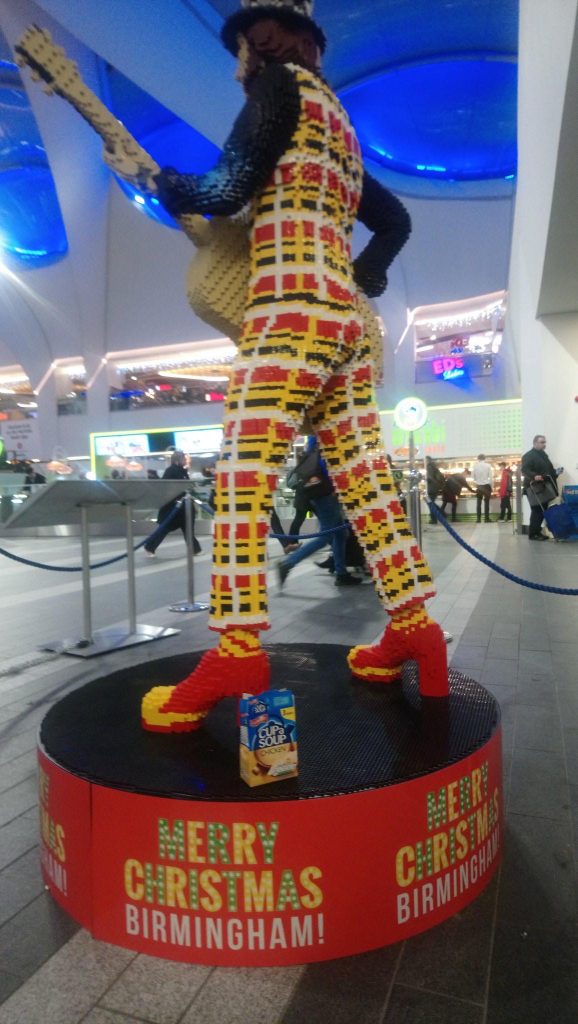 The faceless statue at St Martin

A new addition to ‘the drinking outside is okay if the middle class do it’ parade is a ski lodge simulacrum on the bull ring space where people normally go to eat there sandwiches. Outside St Martins church. I would say that it’s a bit of an affront to have such a dull cash-grab near the church, but that ship sailed with the Christmas tree made of blocks of lurpak butter stationed outside Jesus’s house a few years ago.

As part of the fun you can put your head inside a giant polar bear and have your picture taken. Other fun things include having to run to a cash machine because they don’t accept cards, sitting at an already occupied table in your coat, and pretending that paying five pounds to drink flat lager out of a plastic cup is Christmassy. 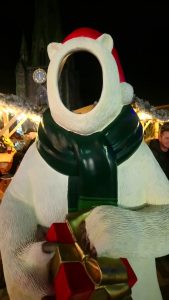 Now the bear is fine when its being used, but if you look at it, really look at it, when its not and its becomes a Lovecraftian horror, a unseemly thing for a void for a face and a name that looks like a welsh road sign, craving to be filled.I watched the monster consume several people and a child and wondered if they were permanently changed or tainted in some way.

The building of the Primark

Just like the great pyramids were built on sand, the Primark building is built on the even flimsier premise that capitalism is sustainable enough to merit a giant building selling disposable clothes. At the moment it looks like one of those books you got in junior school where a massive ship or something would have its layers printed on acetate so that you could peel away and see inside.

You can just about make out the shape of what it’ll be. At the moment with the shapes that make up its main trunk and the way it overlaps, it’s reminiscent of a insect’s shell. A mighty beetle to roll the tired old concept of ‘shopping as pastime’ across the sky one more time.

As I stare on a ye mighty plant works and tremble, I notice no one else is looking up. The city almost pointedly ignoring it.

The bauble bar of Pigeon Park

Is it a pointless bar that sells only baileys and cider? or is it a Christmas tree with one really elaborate bar size decoration selling drinks no one wants for prices no one can afford. Why choose? It can be both. The market at Pigeon Park looks like Birmingham has been twinned with the migrant caravan, a slim pickin’ shanty town that has five sheds and the bar going for it. Make the effort to pop in if you are desperate for a feeling of disappointed melancholy

I arrive at the moose late, the floor leading up to it is spotted with broken glass. People walking around with litre tankards wield them like cudgels. Not intentionally, it’s just that much glass is difficult to hold in a way that doesn’t give you wrist ache.

Someone along the line decided that the moose’s name is ‘Chris’ although everybody just says ‘the moose’. And even though this in-depth piece of reportage missed this,  a twitter account, where somewhat gallingly he has more followers than me. 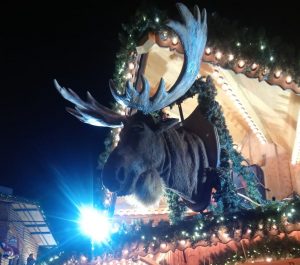 That’s not why I hate it though, and it’s not because the whole thing is a cheap gimmick with the shelf life, and most of the same parts, as one of those singing fish that your nan likes. It’s his dead eyes. Next time you go, and let’s face it we’re all gonna hate it or not, look past the eyelashes into the cold heart of a robot that would kill us all in second come the robot revolution if one of those dog robots that were constantly bothering with hockey sticks told him to do it. Think about that when he’s tweeting moose puns.

It’s easy to take the piss out of the markets, because they’re shit. And remember, I hated them way before it was cool to do so. And then I defended it because one of the editors here thought it’d be funny to make me too see if a logic chip in my head fritz out.

While I was visiting the hateful moose, there was a bunch of people from the St Basil’s sleep out, raising money by sleeping out of doors in winter. I saw people having drinks from offices, perhaps seeing a work colleague as a person for the first time all year. The day after while writing up my notes my parents leave for a do at the social club raising money and celebrating the life of a local woman who sadly died. Communities doing what they can and looking after their own. Christmas is when we take a moment a find our humanity.

Why do we associate the word ‘humanity’ with all good qualities, empathy, kindness, warmth? There’s just as much evidence to suggest when we talk of showing our ‘humanity’ we should be meaning greed, cruelty, and spite. Right?I think it’s because when we recognise that when we are all the same globs of flesh hurtling on the same rock we cant help but treat each other as equals. Christmas is the time see each other. A candle before the dead time we all huddle around and see each other as the same. And in Birmingham if we have pay six pound for a litre of dire lager and eat bland but oversized hot dogs to do that. Then fuck it, I’ll meet you by the fucking moose.

Danny is bored. Have you got an event he should go to? No promises he’ll turn up, or that we’ll publish anything he writes about it. But still, he’d lighten up any social event. Email us: PleaseSendDannySmith@paradisecircus.com