For the people visiting the Tory Party Conference in Birmingham this week, our city’s marketeers are offering a fact pack which includes  “15 IN 15” (their unusual “public relations” “quotes”): 15 things about Birmingham in 2015. We’ve noticed that it’s 2014, actually, so for Tories and political journalists up for a jolly (have you seen how to write an article about Brum by the way?) here are 14 things you should know about the city whose lap dancing bars you’ll be in for the next few days:

1. We have the oldest working cinema in England. But this isn’t it. 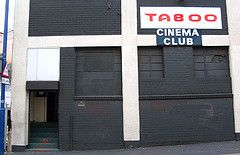 The Electric Cinema on Station Street has survived over 100 years and various incarnations to now show slightly less than art-house films in slightly plusher and more expensive surroundings than your average picture house. It used to have a set of sculptures of dismembered bodies on the front — an installation called ‘Thatcher’s Children’ — which would have made a nice metaphor of what you’re done to the city.

The Taboo Cinema Club round the corner is offering a Party Conference discount, however.

2. The papers might go on about Michelin, but we’re a Dunlop town.

Brummies like food, especially local independents such as Baguette du Monde. While the local press are obsessed by a certain stars-based rating system  ask the average person about Michelin and they’ll tell you that you can probably get cheaper remoulds from a place down by the IMI in Witton. We invented the tyre, so we know a load about rubber.

3. We have more quarters than Venice. Probably.

And certainly more than the relatively small Manchester. Your full guide to Birmingham’s quarters.

4. We’re about to have the second biggest Primark in the World.

5. And a big John Lewis. The shop manager is already in charge of the city.

But he wasn’t elected.

6. People not from Birmingham include: Slade, Lenny Henry etc.

But if you’d like to wind up the Black Country types, we’ll have them.

7. Bill Clinton had a pint here once. But we don’t go on about it.

8. Neville Chamberlain probably did too.

That, we don’t mention so much.

9. The local Tories are mostly a little odd.

Or just generally a bit schoolboy.

10. In Birmingham people generally laugh at them. You give them a platform. 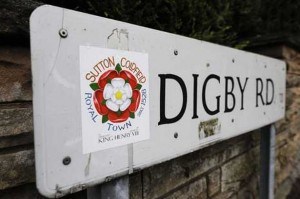 And being all in it together, and the power of devolution.

We’re a romantic bunch, rather than a bunch of short people with hairy feet.

13. We’ve written a huge long review of the new Library of Birmingham for its one year anniversary.

It’s not officially out until Wednesday, but you can see it here.

The last Tory majority administration on Birmingham City Council was, let’s see, NEVER. Your austerity regime is about to cost another 6,000 council jobs. The only Snobs we like has closed. We also quite like being able to walk down our vomit-splattered Golden Mile without being stopped by coppers with guns. Don’t let the Birmingham door hit your ass on the way out Mr Cameron. 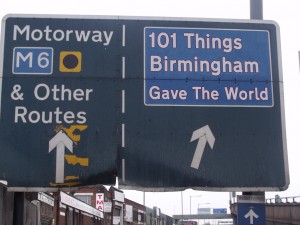