It’s 1999, Birmingham, the end of the millennium and Jim Vale, aka Jimmy Tyrant, singer of one hit wonders The Tyrants, has lost everything he once loved. Like Kurt Cobain, Jimi Hendrix, Jim Morrison and many rockers before him, Jim tries to end it all by committing suicide at the age of twenty seven. Trouble is… he survives.  To clear his debts the band’s manager suggests Jim fake his own death – just for a while – so they can raise The Tyrants’ profile and sell some records.

But as the press and the fans wonder more and more about the disappearance of the mysterious  Jimmy Tyrant, Jim gets drawn deeper into Birmingham’s gangland and  further  away from his ex-girlfriend, his troubled family and music.

Karaoke-singing gangsters, reclusive teenage internet millionaires, sex, drugs and rock and roll all collide as Jim tries to understand the person he has become, to come to terms with his tumultuous past and somehow make it beyond the age of twenty seven.

“27” is a book about one man’s search for love, music and his true self.

In this extract Jim has come back to a city in flux. Birmingham is leaving its industrial past to flat line. It is a city that’s centre has been ripped open and torn apart for the rebuilding of the Bull Ring Shopping Centre. Fin de siècle Birmingham was the ideal setting for a story of upheaval, confusion, fear and change.

Oh, and according to Nostradamus, it will soon to be the end of the world. And the millennium bug is going to help it along. Remember the millennium bug? The music industry was also mutating; the first Pop Idol TV show has been aired in New Zealand and is winging its way like a hungry Pterodactyl to our shores.

We join Jim after he has secured a bolthole in the city centre to hide from the not so bothered press. Now he needs to secure his future with a solo album and find the girl he left behind for a life on the road…
END_OF_DOCUMENT_TOKEN_TO_BE_REPLACED

In this new story by Alex Wyatt, a man and woman get more than they bargained for on a night out in the second city. 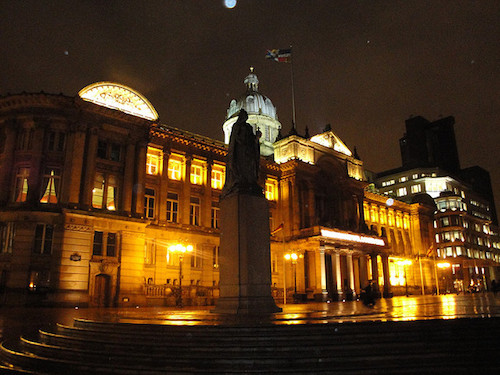 Dark through windows, alleyways and doors. Arm-in-arm, couples stroll steambreathed down Bennett’s Hill’s rainsmoothed cobbles. On Saturday, the day when the word is given. Some head home into light, into electric arms. Away from the grip of the dark.

Some hold firm in the clench.

The Lost and Found.