Part one is here.

The Wump-Tay (pronounced ‘wump-tay’) is a large, ectoplasmic spirit-form with shape-shifting powers that enable it to take the form of any object it desires, so long as it’s a noun. It can grow to the size of a double-decker bus and usually assumes the style, shape and mannerisms of a double-decker bus.

A notoriously mischievous spirit, the Wump-Tay will often lie in wait at bus stops preying on rush-hour commuters and other gullible types. Typically, a would-be passenger will glimpse the diabolical double-decker parked some distance ahead and make a frantic dash for it. The creature will watch the hapless victim approach, and—at the very last moment—slam its doors shut in the poor schmuck’s face and drive off at great speed, often without signalling. A similar tactic occurs late at night. Shrouded in mist, the Wump-Tay will slowly and seductively approach a desperate-looking soul waiting for the last bus home. As the victim clumsily fumbles for the right change, the mist will clear revealing an ominous text scrawled on the Wump-Tay’s destination blind: Sorry – Not in Service.

For a number of years the Wump-Tay was absent from Birmingham’s streets after the local council sold it for an undisclosed fee to the Toho Film Company of Japan. It went on to star in several popular monster movies of the period including Godzilla vs. Wumpt-Tay the Ghost Bus (1973) and Destroy All Buses! (1974). The Wump-Tay eventually returned to the West Midlands after being fired from the set of 1977’s Mecha-Bus vs. Omni-Bus ’77 (1977) for allegedly slamming its doors shut in the face of a studio head.

The origin of the Wump-Tay remains a mystery. One popular legend claims it was the vengeful ghost of a classic 1965 Daimler Fleetline double-decker whose life was, quite literally, cut short following a surprise altercation with a low-bridge.

Widely regarded as one of Birmingham’s most controversial sons, millionaire playboy Bruce Stein was sole owner of the vast family business founded by his grandfather, Capability Stein, the eccentric Victorian scientist who famously invented the world’s first nasal contraceptive. Bruce—the only son of Thomas and Martha Stein—was born in 1920 at the family’s stately manor in Frankley Village. Their home was said to be so large and imposing that it once dominated Birmingham’s city centre skyline, despite the fact it was located in Worcestershire.

As a child Bruce idolised his parents, but a family trip to the Aston Hippodrome theatre to catch the opening night performance of a Pirates of Penzance revival ended in tragedy when he saw them shot down in cold blood by an out-of-work vaudevillian with a casting grudge. At his parents’ funeral the grief-stricken lad made a solemn vow to avenge their deaths, avoid Gilbert and Sullivan comic operas and make do with matinees whenever possible. 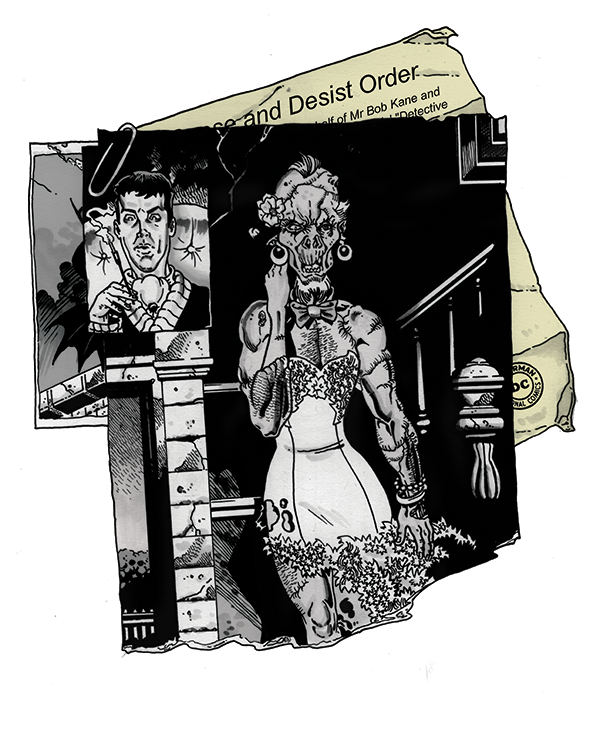 Following graduation and the incident with the shoes, Bruce spent many years travelling to exotic locations to study and master various bleeding-edge combat techniques. While he was away the Second World War broke out and, ironically, if he’d delayed his travel plans by just a few more weeks he could have gained similar experiences and had them subsidised by the government.

After returning from his travels, his application to join the local constabulary was declined on the grounds that he’d refused to reveal his mother’s maiden name. Undeterred, Bruce decided instead to finally avenge his parents’ deaths by prowling the streets of Birmingham dressed as a rodent-themed vigilante. This plan had to be abandoned, however, after he received a strongly worded cease-and-desist telegram from a major comic publisher.

Like so many other wealthy orphans forced to renege on a graveside vow of vengeance, Bruce felt that his only remaining option was to physically resurrect his parents. As luck would have it, he was already equipped with a good basic knowledge of bringing the dead back to life as he’d once signed up for an Introduction to Resurrection Techniques workshop during Freshers’ Week at Oxford. He thought it would look good on his CV. After renovating his grandfather’s abandoned laboratory underneath Stein Manor and setting up some lightning conductors on the roof, Bruce exhumed Thomas and Martha’s corpses from the family crypt. He was horrified to discover, though, that their mortal remains were in a terrible state of decay. Due to an embalming fluid shortage at the time of their deaths all that was left of his parents was the left half of his father’s body and the right half of his mother’s. Fortunately, those were the sides they preferred to be photographed from.

Ever resourceful, Bruce dragged their bodies to his underground lab, laid them out on metal gurneys and set about stitching their two extant halves together to create what social workers would now call a composite parent. During a dark and stormy night he attached electrodes to their extremities, pulled a massive lever and stood well back as massive bolt of lightning struck his unnatural handiwork. “I am the new Prometheus!” he cried, as he watched his patchwork parents spasm violently to life in a manner not dissimilar to freestyle body popping. Unfortunately, as Bruce forgot to strap them down securely, the next bolt of lightning caused them to suddenly catapult from the gurney and ricochet off the walls.

For Bruce, the final outcome was a mixed result. True, he had successfully brought his parents back to life, but these were not the same kind, loving, yet effortlessly sophisticated people he fondly remembered from his millionaire playboyhood. Due to neurological damage at a cellular level the creature was stupid, ill-mannered, and refused to treat Bruce as a grown-up. To make matters worse, it was also prone to bickering amongst itself.

Rumours of strange goings-on at Stein Manor soon spread amongst the superstitious locals of Frankley, who promptly
descended on the house carrying torches and pitchforks. Unfortunately, due to the war, outraged village folk were somewhat thin on the ground so additional outraged village folk had to be coached in from neighbouring areas. The crowd soon dispersed in embarrassment, however, when the creature was seen giving Bruce a spanking over a minor curfew infringement.

Happy childhood memories quickly faded as Bruce became increasingly resentful of his overbearing born-again parents. A prisoner in his own home, he’d often taunt them by saying cruel things like “What do you get if you mix Dad and Mum? Mad and Dum.” In return, they’d simply retaliate by giving him a spanking over a minor curfew
infringement.

Within a year of their rebirth, however, Bruce’s parents separated. He could see it coming, of course—they’d been drifting apart for months, their lives moving in different directions—but when the day finally came he was overcome with sorrow and remorse. It felt like he was losing them again. “If only I’d used stronger thread,” he thought.

The Wrekin is Birmingham’s legendary 200ft tall sea-monster. Her origins can be traced all the way back to days when the city had a thriving coastline.

The Wrekin has often been compared to the famous Scandinavian sea-monster known as the Kraken, despite the fact that Scandinavian sea-monsters are notoriously egotistical and like to think of themselves as unique. Both creatures, though, share many similar attributes, including one giant eye, eight massive tentacles and three of the same consonants. However, while the Kraken has commonly been described as resembling ‘a giant, ill-mannered squid’, the Wrekin is said to bear a closer similarity to ‘an immense serving of fried calamari’. This is due, in no small part, to her distinctive outer coating of crispy batter.

For many years, the Wrekin was believed to live in Birmingham’s Edgbaston Reservoir. Would-be monster-spotters from as far afield as the United States, Japan and parts of Dudley would flock to this man-made lake hoping to catch a glimpse of this famous creature and possibly validate their meaningless lives. This later turned out to be an elaborate hoax concocted by a cynical employee of the nearby Tower Ballroom, which—at the time—relied heavily on foreign monster-spotters for business. Though known primarily as a sea-monster, the Wrekin is actually an amphibious creature who’s not averse to the occasional stroll on dry land. Unfortunately, like many other all-terrain leviathans, she suffers from an acute strain of narcolepsy. This has earned her the enmity of the region’s motorists as these impromptu power-naps invariably take place during the mid-morning rush hour at inconvenient locations such as major motorway junctions or busy interchanges.

As a result, motorists are forced to drive, quite literally, ‘around The Wrekin’. 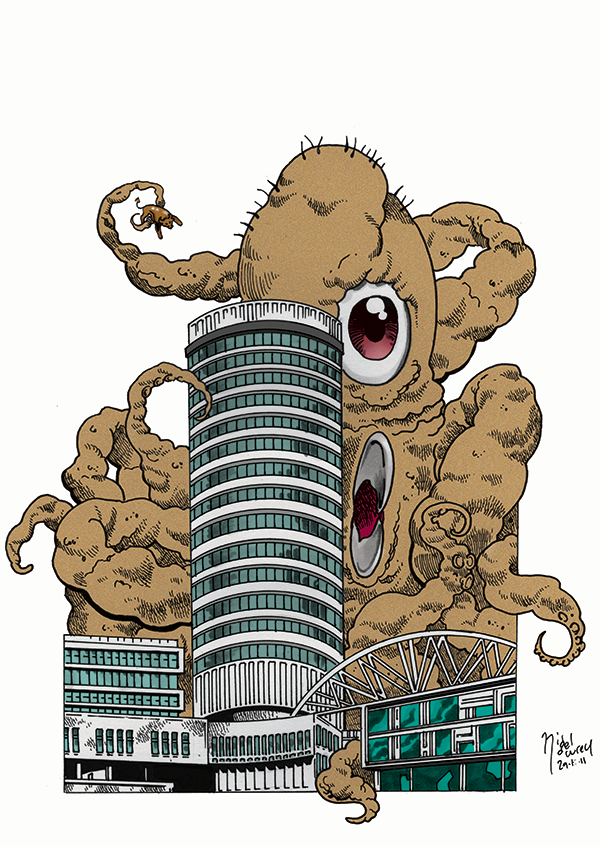 Due to space constraints this article has focused mainly on creatures from the Birmingham area. For an in-depth analysis of supernatural creatures from areas surrounding Birmingham, we strongly recommend Professor Zeppo Connery’s classic text Black Country Beasts (Aynuk & Ayli Press, 1991) which features frank and revealing interviews with Yampires, West Brombies and even Werewolverhamptons.

This originally appeared in issue two of Dirty Bristow, illustrations are by Nigel Lowrey.