The city of Birmingham is famous throughout the world for its rich industrial heritage, its vast canal network, and its large population of supernatural creatures. The following is a brief overview of some of its more popular and enduring myths. People from Birmingham often call themselves ‘Brummies’, a word etymologists claim can be traced back to the ancient Midlands art of preserving dead bodies known as Brummification. The origin of the word ‘etymologist’ however, still remains shrouded in mystery.

The original Brummies were dead local aristocrats whose bodies were painstakingly preserved using bandages, motor oil and a secret recipe containing 11 herbs and spices. This, of course, was something only the super-rich could afford due to their innate ability to keep up with monthly repayments over several thousand years.

The practice was introduced to Birmingham by ancient Egyptian undertakers at a time when the city still had strong commercial links with the Ptolemaic dynasty. Writing in the 1st century AD, the Roman historian Tacitus described a large British settlement “some CXII miles north of Londinium, so long as you leave the M XLII at Junction VIII.” He scornfully referred to it as “The Pyramidlands” although reluctantly acknowledged that the area “had more camels than Venice.”

Birmingham’s links with ancient Egypt remain visible to this day. Many public spaces still feature ornate statues of sphinxes, obelisks and dog-headed industrialists. The area now known as the Balti Triangle, for instance, once had a third dimension and formed a massive pyramid. In Victorian times, the construction of the city’s famous canal network was only made possible thanks to a generous donation of water by the river Nile.

It was during the Victorian era that ancient Brummie remains first became a regular feature at local museums. Unfortunately, many of these exhibition pieces were accidentally brought back to life by clumsy trainee curators out to impress their bosses. These bandage-wrapped fat-cats would inevitably embark on a violent campaign of destruction, often fuelled by rage, sour grapes and a frustrated sense of entitlement. “These days just about anyone can call themselves a Brummie,” said one embittered 19th century Tutan-ka-Hooligan who preferred to remain bandaged.

It’s worth remembering, of course, that the 1867 Municipal Titles Act famously abolished the archaic property restrictions that prevented ordinary folk from calling themselves ‘Brummies’. Sadly—due to the institutionalised misogyny of the patriarchal ruling elite—the legislation forgot to include women. This situation was only partially alleviated by the 1918 repeal of the Institutionalised Misogyny Act.

A detailed account of a more contemporary resurrection rampage appears in Sarcopha Guy (Rameses House, 2004), the autobiography of revived Brummie bad-boy Ozzy Mandias. Unfortunately, the book has yet to be translated from its original hieroglyphics.

During the 1970s, Birmingham’s motor industry was thrown into disarray by the sudden influx of new car workers who never took a sick day, agreed to double shifts without grumbling and rarely mixed with colleagues in the staff canteen. They were the first wave of assembly-line robots, and their arrival gave rise to industrial unrest, crippling strike action and—as is so often the case—elaborate urban myths about mechanical mobsters.

The most famous of these so-called MoBots was known only as Boss Tin. Short, stocky and pathologically violent, he was notorious throughout the city for his unbridled ambition, ruthless opportunism and expensive taste in tin-foil Hawaiian shirts. From his modest beginnings as a small-time re-bootlegger, he single-handedly built a vast empire of nightclubs, speakeasies and counterfeit Tandy stores. These were often financed by the proceeds of protection rackets that targeted the city’s beleaguered community of drinks dispensers, pinball machines and Casio digital watches. 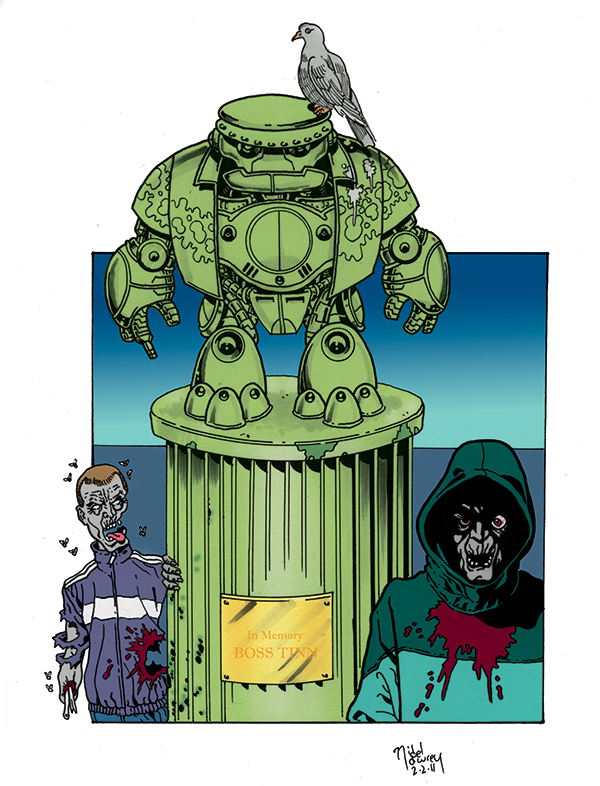 Boss Tin’s reign of terror finally came to an oil-soaked end in 1982 following a botched attempt at kidnapping seven welding robots from the Mini Metro assembly line at Longbridge. After leaving an adult theatre in the early hours of the morning with Tin-Pan Alison, a tawdry strip-teasmade, he was ambushed by the militant mechanised union leader Red Robo and his treacherous Underboss, Al Machino (AKA ‘Carface’). They shut him down in cold blood on Birmingham’s Victoria Square by forcibly removing his batteries and holding a magnet to his tape spools.

A statue depicting a crude metal figure now marks the spot where he died. 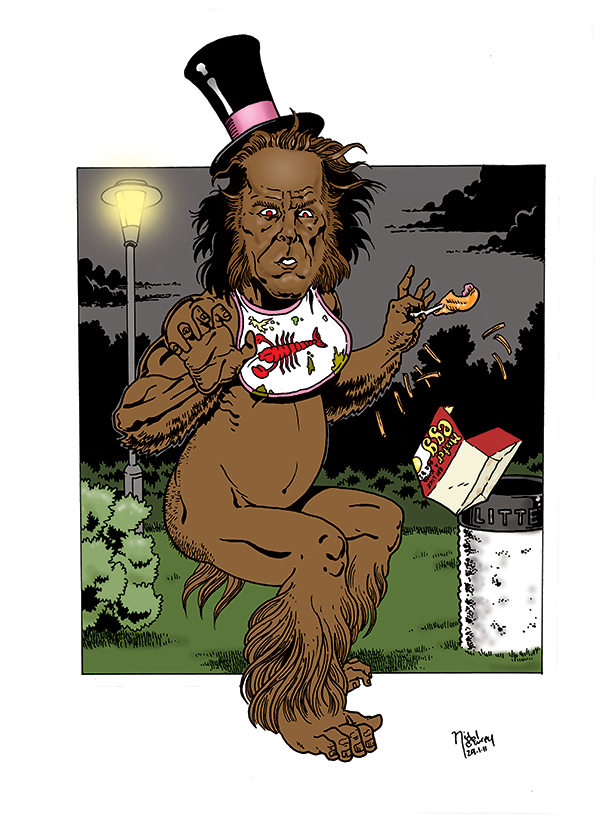 The first reported sighting of the Abominable Snow Hill Man was in 1912, in the part of Birmingham where Snow Hill Railway Station now stands (at the time, of course, it was a popular skiing resort). During the qualifying rounds of a regional competition, the notorious Edwardian mystic, occultist and downhill slalom champion B.L. ‘The Eagle’ Beelzebub caught a glimpse of the beast whilst negotiating a tricky set of gates. His attempt at opening a dialogue proved unsuccessful, however, due to the fact he forgot to stop skiing first.

The Abominable Snow Hill Man was recently in the news following its surprise marriage to the Big Foot’s estranged sister, Muriel. This has led to a bitter and highly-publicised cryptozoological family feud.

This originally appeared in issue two of Dirty Bristow, illustrations are by Nigel Lowrey.