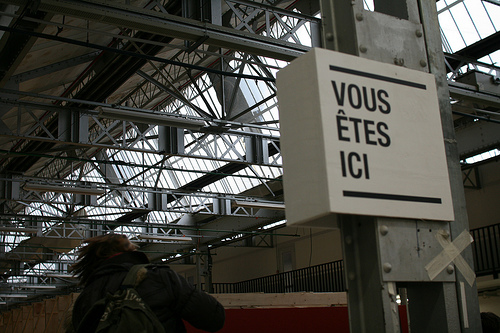 Here’s a question I get asked a lot:

“What on earth are you doing here?”.

I wasn’t born here, in Birmingham, but here I am now: a grown man, a wife, a house, kids and a cat. A responsible job even. Birmingham has me, has me locked in tight.

“But why Birmingham, of all places?”

I didn’t grow up here, in Brum, but here I stand, here and now. I’m part of this place, it’s part of me.

I was born in Guernsey, that’s where I grew up, by the sea, on a little island. You can make some jokes about the French and the war now if you like, I’ll wait for you a moment.

You done? Cool, let’s move on.

I can’t see that growing up in Guernsey would have been that different to growing up in Birmingham, really. As a kid and a teenager you don’t really live in the real world, you live in the pop culture simulacrum of it and so all the things that matter – music, films, underage drinking, heavy petting – are universal ideas, ideas that are about being that age at that time rather than being that age in a particular place. OK we may have had some of our own slang and local memes, true. But put me in a room with anyone from the British Isles who grew up in the 90s and you’ll be hard pushed to tell us apart. I can still sing along to all of Definitely Maybe and What’s the Story Morning Glory (and the b-sides album Masterplan which of course is far superior – you see, this isn’t an act, I am a nineties teenager). I drank Hooch when alcopops came around the first time, was devastated by Kurt Cobain’s death, fell in love with Louise Wener, and was amazed when I saw the dinosaurs in Jurassic Park.

So why are people so surprised that I’m here? It’s about the contrasts, mainly: urban vs. rural, landlocked vs. island, pigeons vs. seagulls1, McDonalds vs. Cows2. It’s also about Brummies’ persistent self-deprecation and possibly – just possibly – their primitive astonishment with the concept of the sea3. Whatever it is, my presence here troubles the average native-born Brummie in a way that it wouldn’t if I told them I was from Dorridge (I probably think I’m a little more street-smart than someone from Dorridge, as it happens).

In sixteen years of being asked why I ended up in Birmingham I’ve developed a series of simple stock responses. An arched eyebrow that says:

“why the hell not here?”

The wry smile that adds

“Brum’s been good to me”

and a shrug of the shoulders that asks

“if not here then where?”

These aren’t real answers. They do nothing to explain how I got from Guernsey to Birmingham, how I find myself here doing well, living well, and how I’ve come to care for a place that seems to care for me back just as much. But they do reveal something really important about me. These half-arsed apologies can only really mean one thing: I’m a Brummie now.

1 Of course Guernsey does have pigeons and Brum – and this never fails to confuse me – has seagulls. But the metaphor shall stand.
2 There is still no McDonalds in Guernsey. We had a Burger King. It came and went since I came to England. Some Guernsey folk buy lots of BigMacs when they travel to the mainland and freeze then reheat them when they get home. In 1995 McDonalds brought a mobile unit over for the Salon Culinaire (a food festival) and the queues were bigger for that than they were when McDonalds opened for the first time in perestroika-era Moscow.
3 I’d like to take some Brummies to Guernsey and stand them by the sea at high tide, see what they do as it runs out. The other way around is too mean.