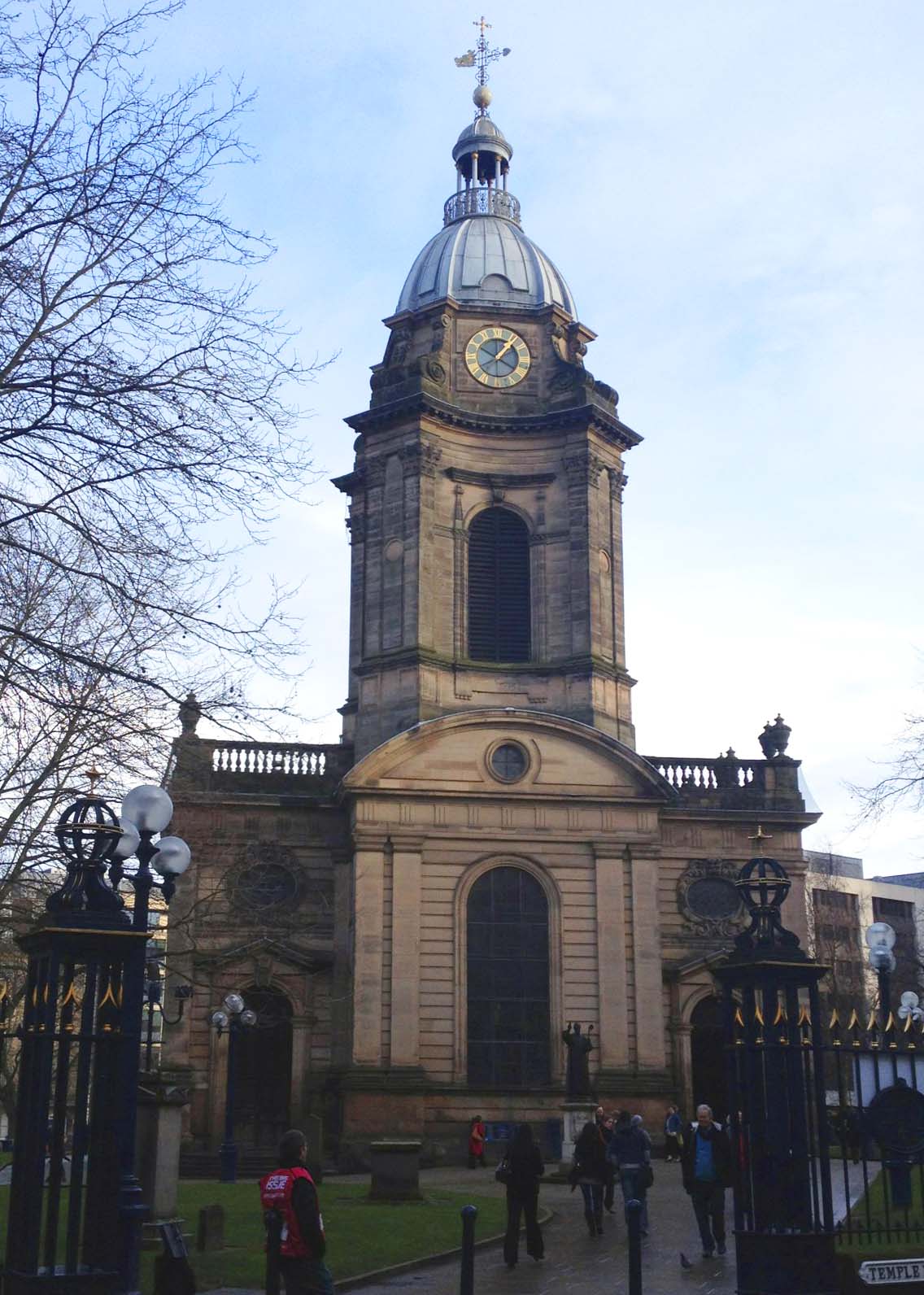 Here also is the cathedral clock tower. This is original Birmingham landmark: unexpected Italian Baroque on the crest of the hill, visible for miles to those approaching the town in 1715. The architect Thomas Archer had seen similar designs on his holidays in Rome and recreated it at home. The tower is topped off with a snarling dragon’s head weather vane.

From here, head down Church Street and witness the spectacular oriole on the corner of the former Eye Hospital – now Hotel du Vin. An oriole is a projecting window bay usually on the corner of a building, a budding turret. This one has a faux balcony and intricate corbel (supporting structure). An oriole is closely related to a turret: a turret needn’t project above the height of a building to qualify. A fully fledged tower rises from the ground, while a turret sprouts from the building some way up. The function of both was to allow you to survey your land, or to watch for enemies, slightly detached from the room, having the feeling of being outside with the protection of inside.

Turn left onto Cornwall Street and at the junction of Newhall Street are two corner turrets. On closer examination, All Bar One’s turret is an architect’s conceit as it is practically flush with the walls. The projection is an optical illusion. The same is true opposite the turret’s projection from the building (formerly a doctor’s consulting rooms) is actually rather slight. Consider these faux turrets the equivalent of pilasters – those two dimensional suggestions of columns often found outside Victorian pubs. Impressions of turrets without the expense. This is the role of the Victorian turret: a device to hint at a long-established, successful business or home, one having something worth protecting. Victorian architects were the original post modernists – they had no specific style of their own but rather they plundered the past for inspiration and association. Classical, gothic and mediaeval, recreated in red brick and terracotta then topped with a weather vane. This particular one has a mysterious letter M on a flag above it. 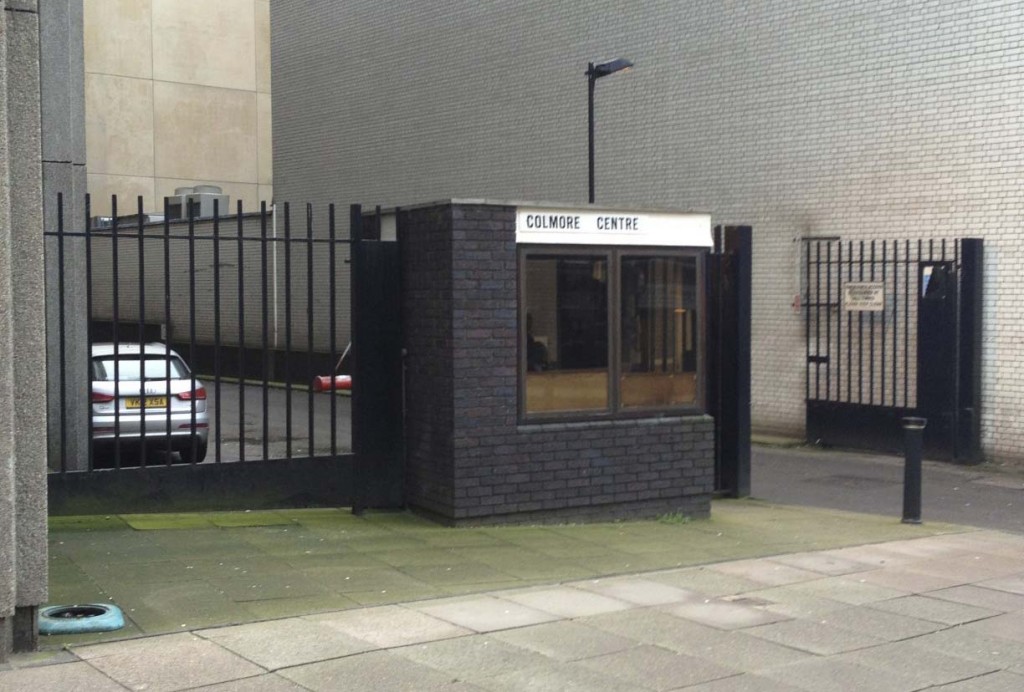 Heading back up Newhall Street, just before the Natwest tower, you will pass a car park kiosk by Brutalist architect John Madin. Humble but honest, and (naturally) scheduled for demolition. A kiosk has come to mean any small enclosure with a window hatch but in its earliest (Persian) form, a kiosk was a round, open sided pavilion rather like a bandstand, built in a garden built for the pleasure of observing the grounds. Kiosks in this sense only appear in Birmingham as architectural details on the roofline of Victorian buildings and in shopping arcades. Turn right onto Colmore Row, then right again down Eden Place and near the bottom look for the hexagonal Kiosk. This is the still staffed security barrier to the huge underground council car park and was known affectionately to staff as the Tardis. The School of Art on Margaret Street is topped by another tower of sorts – you may need to step back to get a glimpse. This is a solar chimney: a means to ventilate the school by allowing the sun to heat a column of air, which would rise and cause currents to flow through the building. Before hygiene was invented in 1950, schoolchildren absolutely stank. Prisons of the day also had these, which we now sometimes mistake for watchtowers. Birmingham’s skyline is peppered with these often bizarre looking structures.

Head next into Victoria Square. Dhruva Mistry’s sculptural stone columns flank the steps. Below is our first indisputable tower, on the side of the Post Office on Pinfold Street. It’s a fabulous, four-storied, domed tower, noticeably separate from the main building. It was saved from demolition in 1979 through the efforts of the Victorian society. The different lengths of window reflect the position of the staircase inside.

Head into Chamberlain Square past the boring Council House clock tower and through Paradise Forum into Centenary Square. The Hall of Memory here doesn’t feature on our trail, though its shape suggests a kiosk, gazebo or something similar. It is in fact merely a hall. However, this is a good location to see many of Birmingham’s high-rise tower blocks and skyscrapers – or at least get a glimpse. In a clockwise rotation, the panorama reveals Richard Seifert’s Centre City Tower, the Orion building, Holloway Circus Tower, Clydesdale Tower, Alpha Tower, the Hyatt Regency Hotel, the campanile at Brindley Place (where we are heading) and the Post Office tower: Birmingham’s tallest structure.

Cross Broad Street and head towards the Golden Boys sculpture. The advertising column ahead topped with a cupola is a structure known as a Litfass. The name comes from its inventor: Ernst Litfass, a nineteenth century printer from Berlin. Litfass hated to see posters and bills pasted randomly in the streets so developed a column to display them tidily. They have a certain enigmatic quality… the suggestion that they do something more than merely hold posters. In The Third Man, Harry Lime, doyen of the Viennese underground, vanishes down a staircase beneath a Litfass to escape his pursuer. This one is decorated with six lions heads and neoclassical styling, other Birmingham models bear the street name such as the cluster on New Street. Oddly, the plainer Litfass on High Street has a door.

Further up Broad Street is a stone and glass sculpture – head towards this and turn left into Regency Wharf. From here you can see a rare survivor in post Industrial Birmingham: a chimney stack at the former Pearce and Cutler glassworks. The banal rendered exotic by time. A chimney may seem off limits for the tower tourist, but this is exactly what the famous Waterworks tower in Edgbaston is. The architect Chamberlain effectively disguised it as a Venetian tower, perhaps to preserve the conservatism of the area. 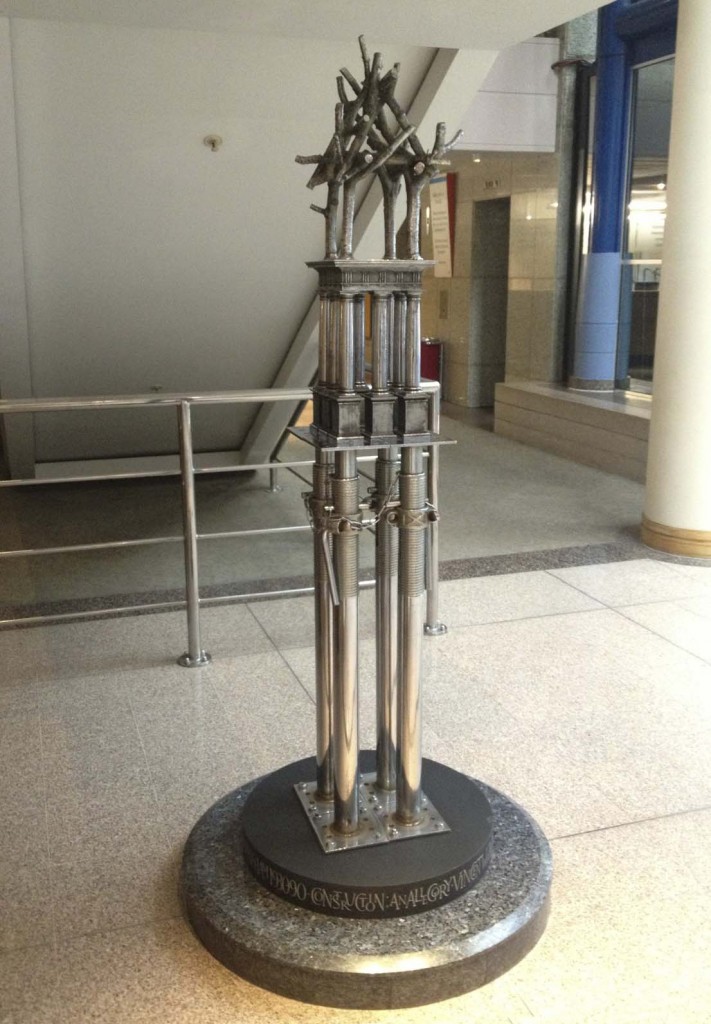 Cross back over Broad Street and head through the ICC. On the right, look for Vincent Woropay’s sculptural tower, showing building techniques and materials through time. (Woropay’s other Birmingham work is also a tower: the bizarre Wattilisk on Newton Street). Continue through to Brindley Place’s immaculate neoclassical theme park, watched over by the giant campanile – more evidence of Birmingham’s ongoing love affair with Italy. The word campanile is simply Italian for bell tower and indeed this one has a distinct Italian village square evoking chime. In continental Europe the term more strictly applies to a free standing tower, such as the Joseph Chamberlain Memorial Campanile at the University of Birmingham campus – which at 110 meters is the world’s tallest.

Across the square – or piazza – is the BT building with its huge yellow brick tower and “bullnose” rounded corner beyond it. Turn left onto Oozells Street to conclude the walk outside Ikon Gallery, formerly Oozells Street School. The ventilation tower here was demolished in the 60s when it seemed it might fall down if left unchecked. In 1997 it was rebuilt entirely according to the original drawings. The current entrance is cut into another smaller tower, which taunts us to define it exactly. On one side, the tower’s curve evens out into a straight wall, making the whole thing a scroll. The history of the Ikon Gallery has its genesis in a hexagonal, glass walled kiosk in the bullring c.1965. 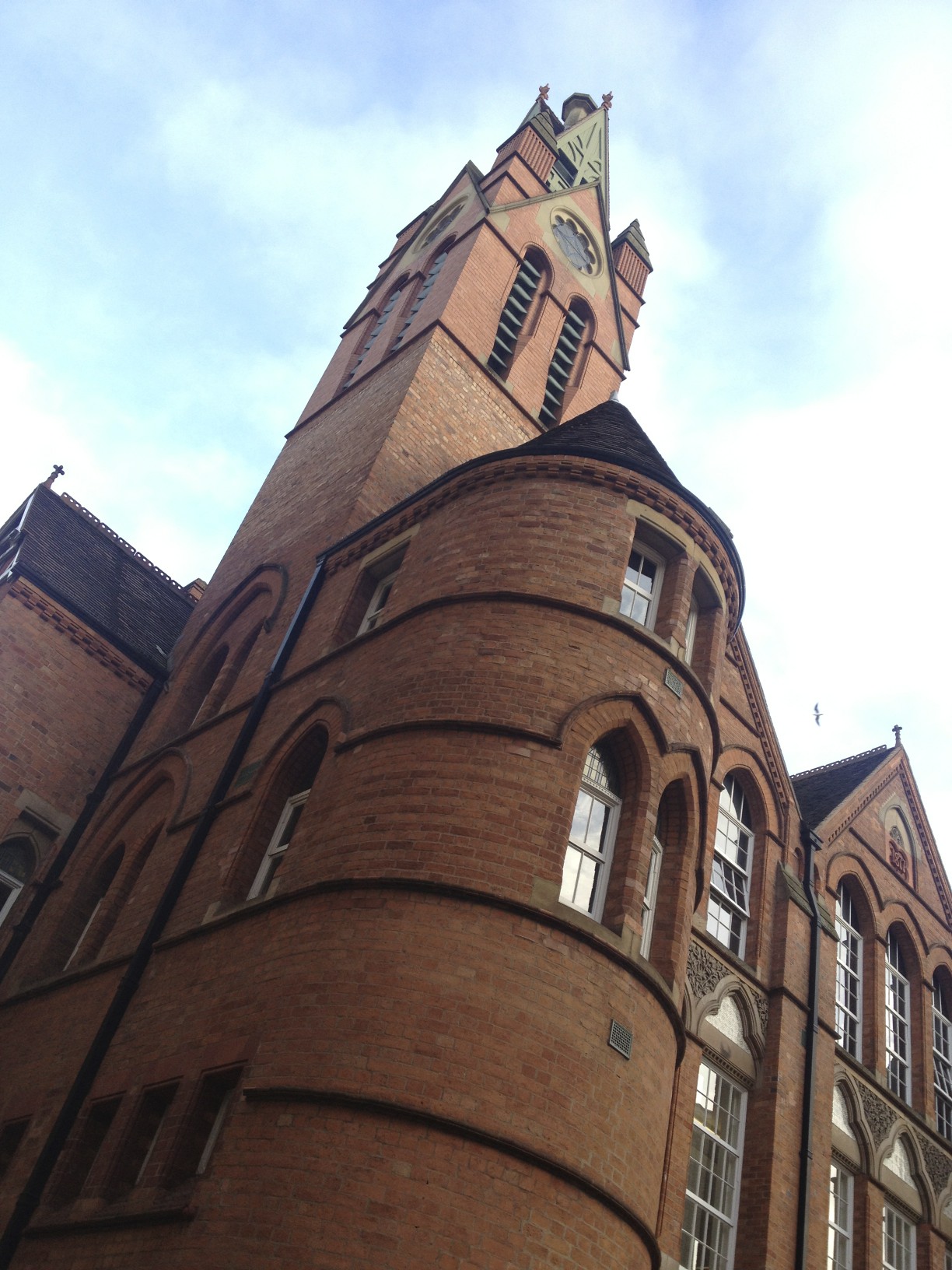 By this point we’ve seen enough to know that the line is blurred between all these different  entities – but whatever they are, Birmingham has many excellent examples. The purpose of our walk was not merely to learn something about towers; rather it was to have a motive to look at the city and to realise there is a lot worth seeing. The tour just touches on what’s out there, with plenty left to discover for the urban explorer with lofty ambitions.