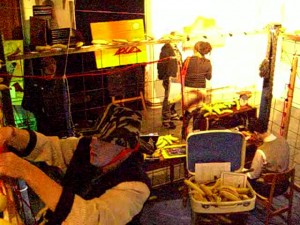 END_OF_DOCUMENT_TOKEN_TO_BE_REPLACED

Besides unexpected in-situ encounters that stimulate criticism, my journey as an eccentric archaeologist continues to present contradictions and hypocrisy. This is not surprising. Curiously a recent doppelganger experience occurred in which I was identified by several people as being someone else….

Either way, I was delighted to have had such a number of simultaneous (mis)representations and encounters. It must have been at least ten years ago when I approached a person as mistaken identity. It made me question my motives and reasons for making snap observations mixed with rash excitement. Judgements have no absolute hold on what appears to be the truth of course…..

This leads me nicely onto the latest eccentric investigation into The Darknosis Project, a project that takes place as part of a mythological environment at The Edge starting this Friday for one week. The imminent PhD Show (Pete Hadfield, Harry Palmer and Diane Taylor) – have spent several months formulating vintage accounts of socio – environmental and biological ancestor hood in which previous incantations of lost tribes and civilisations have shaped our current condition as humans (and the PhD show). Myths, of course, are not merely roamers or absolute fact – they are stories which have arisen from an ongoing narrative shared via our individual interactions between each other; as necessary strategies to enable evolutionary (human) development – the evident weaving of our sentient worldwidewebness.

The PhD show is more than a walkabout form of entertainment (indeed we indulge a joyful sense of humour to elicit curiosity of course). Locating our current HQ at The Edge in Birmingham, I can now reveal a little slice of installation, a personal introduction by way of invitation.

A live webcam relay across the electronic data field (aka the internet) will hopefully pulsate personal mythological investigations from inside my purpose built metal cage. This metal cage will house my bedroom (and myself for one week 24/7), relocated for the purposes of in-situ discovery. Those familiar with my eccentric archaeological approach to date will recognise the trait – to investigate the world on location, in locations. This PhD show is therefore housing myself and my bedroom as a portal of gestating stories – fact and fiction. The Transformative Darknosis Psychic Centre of Research (myself and my metal cage and bedroom) within the PhD show has been designed to alter my consciousness once more – perhaps presenting more misrepresentation and new understanding from previous identifiable traits that have attempted to describe me and my world amongst us. You are invited!
END_OF_DOCUMENT_TOKEN_TO_BE_REPLACED