It sometimes feels like it’s always awards season in Birmingham — in fact it’s been said we have the second longest awards season in Europe — because if there is a drum to be banged or a trumpet to be blown you can can guarantee that there will be a Brummie standing nearby, claiming that they own it and ready to have a go. And behind that Brummie, press ticket in hat, is a reporter from the Post and Mail. But Quis scribet ipsos scriptores? Who is looking at the real skills of the footsoldiers of our local media?

Those pounding the streets of Tweetdeck and the editorial inbox, we salute you. 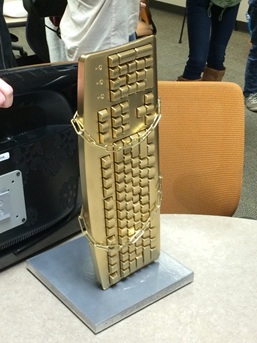 Today we launch the Championing Urban Brum’s Real Notetakers awards — inelegantly varied as the CHURNies — celebrating local journalism excellence, from SEO to good Tweeting practise, from erm SEO to desk-based news gathering, with a side order of fries served in a old shoe in order to review the latest craft beer street food hangout. Who will come to our literal opening of an envelope? Who but the Evening Mail will live blog it?

We are now accepting nominations in the following categories:

Please send nominations to: hello@paradisecircus.com, and tell your friends about the CHURNies.