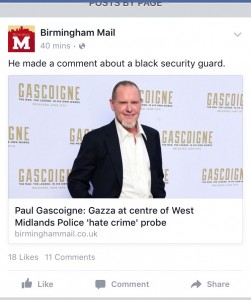 He made a comment about a black security guard,
Remember this, cult TV fans?
I don’t remember seeing this in any nativity story,
Will you welcome Tyson Fury to Birmingham?

Raise a glass to Birmingham’s newest bar,
40 St Paul’s, which offers nearly 60 types of gin.
Cheers!
Birmingham community shows it will not live in fear of gun crime.

Armed raider who was self-styled ‘Robin Hood’,
says he was ‘obsessed’ by committing crime.
Man arrested over death of woman found with head injuries.
The targeted the accounts of dead customers – and duped Barclays into paying out.

Who would send their kids to schools like these?
This might raise a smile – unless you were a passenger.
Pure scum,
They sold cut-price cigarettes stashed in secret compartments.

A nasty crash on a busy road,
What a terrifying ordeal for the victims.
Almost every pub seems to show live football these days
– but here’s a warning.

Shame it didn’t make the top 10. Is Birmingham your favourite Christmas market?