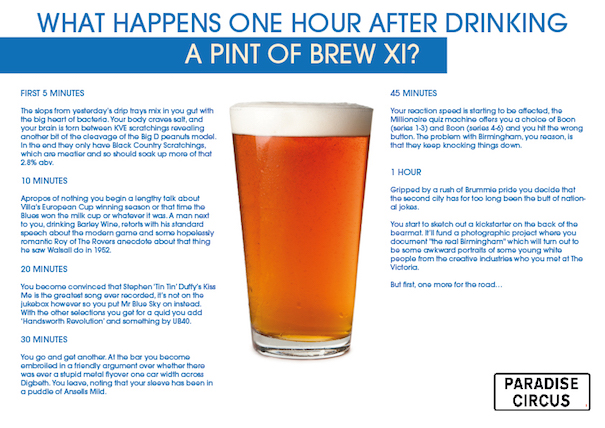 The slops from yesterday’s drip trays mix in you gut with the big heart of bacteria. Your body craves salt, and your brain is torn between KVE scratchings revealing another bit of the cleavage of the Big D peanuts model. In the end they only have Black Country Scratchings, which are meatier and so should soak up more of that 2.8% abv.

Apropos of nothing you begin a lengthy talk about Villa’s European Cup winning season or that time the Blues won the milk cup or whatever it was. A man next to you, drinking Barley Wine, retorts with his standard speech about the modern game and some hopelessly romantic Roy of The Rovers anecdote about that thing he saw Walsall do in 1952.

You become convinced that Stephen ‘Tin Tin’ Duffy’s Kiss Me is the greatest song ever recorded, it’s not on the jukebox however so you put Mr Blue Sky on instead. With the other selections you get for a quid you add ‘Handsworth Revolution’ and something by UB40.

You go and get another. At the bar you become embroiled in a friendly argument over whether there was ever a stupid metal flyover one car width across Digbeth. You leave, noting that your sleeve has been in a puddle of Ansells Mild.

Your reaction speed is starting to be affected, the Millionaire quiz machine offers you a choice of Boon (series 1-3) and Boon (series 4-6) and you hit the wrong button. The problem with Birmingham, you reason, is that they keep knocking things down.

Gripped by a rush of Brummie pride you decide that the second city has for too long been the butt of national jokes.

You start to sketch out a kickstarter on the back of the bearmat. It’ll fund a photographic project where you document “the real Birmingham” which will turn out to be some awkward portraits of some young white people from the creative industries who you met at The Victoria.

But first, one more for the road…