An enterprising young chap has just re-opened Dale End dog-hole Saramoons as a theme bar: The Peaky Blinder. Despite now being much less likely to have any real gangsters in, it seems to have been a popular move — but did you know it was joining a proper crawl of pubs already themed around Birmingham-based TV shows?  Come with us and get smashed responsibly, in Brum’s best fictional boozers. 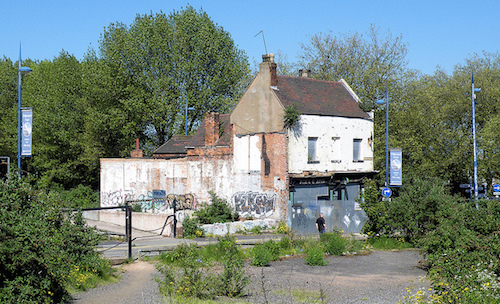 The Crossroads – actually a chain, The Crossroads is a new concept for the pubs you find inside a Travelodge or other budget hotel. “These spaces feel like you’re actually in the wobbly set of a pub and not a real pub” brand expert André De Jong, whose agency Zaphiks developed the concept, told us. “Drinking in our The Crossroads bar is more like drinking in a metaphor” he said, before explaining something complicated about the social graph. “Also they’re actually inside motels?” we asked. Andre just looked confused.

The Rosie & Jim – Genial landlord John steers this canalside boozer with a steady hand on the tiller but that’s not his real job. Ladies, try the salad. Stop laughing. Sister bar The Brum opens in 2015.

The Tiswas – The various bars at the Custard Factory have struggled for identity and solvency for many years but now one licensee is betting on TV nostalgia to keep him afloat. You can sing the famous Bucket of Water Song as you use the downstairs bogs.

The Gangsters – Themed around the ‘70s with a hint of crimplene, Benson and Hedges and danger, there has been little change since it was The Yenton.

The The One Show – Recently closed and moved to London.

The Central News – have the slops left by the other programmes a day later, round the back of Broad St.

The Hustle – a slick bar like they have in that London, but see if you can spot the tell tale Brummie signs — yep that’s a Brew XI tap over there, behind the Veuve Clicquot ice buckets. In a suspiciously empty street around Colmore Row.