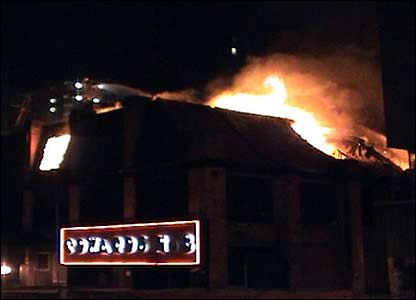 The ‘BUSK’ (Birmingham United Services Club) round the back of the Mailbox isn’t the prettiest of buildings, but it is in prime development territory. Since the great fire of 2006 Eddies has been rocking there, but now there are problems — due to a ‘Change in Ownership’ of the ‘Property’ — so we’re officially placing the building on PC Buildings at Risk Register.

Fires seem to plague buildings in nice areas that are well used or loved by uncommercial communities. It’s tragic when they go up in flames, only for structural tests carried out later to conclude that they are best knocked down. What’s lucky is that often firefighters are able to prevent flames spreading to nearby apartment blocks.

It’s a curse that can dog some of the city’s brightest entrepreneurs. Who would know just what delights would have become of the Villa Leisure Centre or the old Holte Hotel if they weren’t so damn flammable in the late 80s and early 90s.

Do help, add buildings to the register here…

Let’s all do our bit… it’s not just King’s Heath’s problem.