When I conjure a vision of a Victorian city in my mind I start with the sky: a blanket of smoke woven from a loom of towering brick built chimneys.

An industrial chimney is built first and foremost for a function: to carry off an exhaust gas, and to allow the intake of fresh air. Later, once you have a chimney that will do this right, you might turn your attention to adornment, to designing a chimney as an aesthetic task, and to making a statement. But then, much later, if the chimney loses its function it becomes two things: a vestige and a symbol of an industrial past. In the modern day the stacks of the industrial revolution are reduced purely to their secondary, aesthetic, function acting as iconography for industrial heritage. These are the dormant, sleeping, dreaming spires to the empty cathedrals of industry and they have no value beyond sentimentality.

Running down the canal the other day I looked properly at one of the old chimneys just South of Spaghetti and I noticed something: the stack was crowned with phone masts. It seems obvious really: the stack affords rare height in a flat area, so of course the phone companies would want to use the redundant chimneys to house their antennae. The dreaming spires are stirring. Stopping briefly to photograph it I imagined signals pouring through those masts: photos, emails, calls all pumped high into the sky, drawing fresh bits and bytes behind them together knitting together a blanket not of smoke but of data, a digital smog from that loom of towering brick built chimneys. 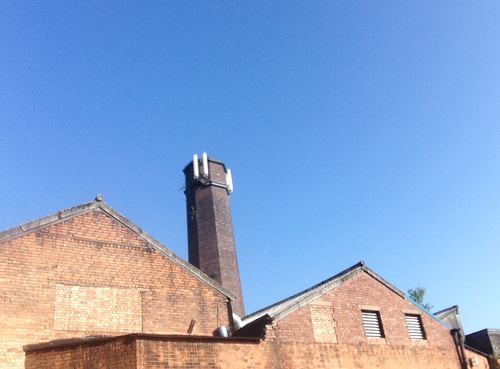