Signs of the times

We mentioned the Type Tours before, but I couldn’t pass up a chance of a private mini-tour for myself: 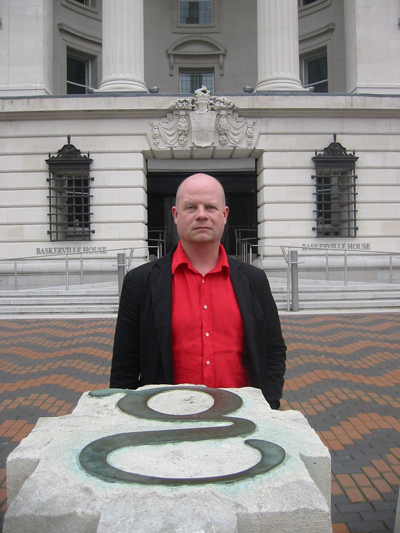 Ben Waddington is one of those people who wants others to appreciate their surroundings. An exiled Manc, he’s been running tours of some kind round Brum for a couple of years – I went on Ben’s tour themed around John Baskerville last year, and was impressed with his research and amiable guiding if not our city’s treatment of Baskerville’s legacy. If we must have a new library (when the current one works, no matter how you consider it looks) then it should feature some tribute – it will be on Baskerville’s old land after all.
As part of the Plus International Design Festival, Ben is running his Baskerville Tour again – as well as ‘Type Tours’ of Digbeth and the city centre. A man who knows Brum well enough to give you a guided tour, as well as being a bit of a font geek? This is someone that I really should get to know, so despite my aversion to meeting strange men in pubs having contacted them over the internet, I popped out to The Old Contemptibles last week where I found Ben, Erdinger in hand. I plumped for a very acceptable Amstel.

We retired to the back of the pub, which now has a gentleman’s club vibe going on, to talk of Birmingham, design, architecture, the M6 and LCL Pils. It turn out that Ben has been posting on the BiNS forums (see if you can guess what name he posts under) pretty much since they started. Looking back it’s obvious that this was a man in possession of facts as well as the sense of righteous indignation that seems to infect the Brum-based internetter.

The first tour of hidden Birmingham that Ben organised was a walking tour of Digbeth’s forgotten pubs, putting adverts in CAMRA magazines and the like. What he neglected to mention in his pre-publicity was that a lot of those pubs were so forgotten that they were no longer open. Despite the James & Lister Lea goodness, some the tourists “were interested in walking to pubs, not so much in walking away from them. There are pubs in Digbeth that are still surviving purely on the indigenous industry, though slowly those are closing.”

We discussed how pubs are in danger as an architectural genre from all sides, the large suburban ones that formed the centre of the community on the post-war estates are fast becoming Chinese restaurants or McDonald’s as they are more and more difficult to profit from and license, squeezed by breweries and the police. In the city centre where pub culture is seemingly still thriving it would be unthinkable to actually design a purpose built pub, Ben says “the most recent one in Birmingham is, I think, The Yardbird – and that’s just a box.”.

Curiously we found out that we’d both got, wildly different, books about Brum that we’re working on – not that I’m about to reveal what’s in either of them – but they both in a way are searching for a reason why Birmingham lost the status as the industrial and creative powerhouse it had during the birth of the Industrial Revolution.

“It was lost a little as creativity and industry separated, Birmingham got industry and that then faded. Birmingham is ready for some sort of renaissance of perception. Maybe that can come though art or music.” Do we need the fabled ‘Tony Wilson figure’? “Capsule are about the closest we’ve got to that.”

As I see it no other city has that figure anyway, for Birmingham it would be the equivalent of Ashley Blake running Capsule and the Custard Factory, while continuing to be news-totty for women of a certain age. I also think that the days of music as the defining cultural force of a city are gone, splintered by downloads and diluted by Blair’s 50% University quotas. Is there a visionary around for Brum from some other field?

There have been plenty of the years, and a brief type-cum-architecture walk Ben takes me on, in rapidly fading light, helps to prove that. Surprisingly, I find that Ben wasn’t a typography expert before being asked to do the tours: “I was asked, originally, to do the Baskerville tour and researched that, then for this year to do the type-specific tours. I find I look at buildings differently depending on what tours I’m conducting. Originally it was architecture, now I’m focusing more on the signage.”

“The type-tours aren’t just about signs that are ‘printed’, the Digbeth one in particular will be as interested in hand painted notes and other letter-forms. You can talk about theory, but often you can only guess at the intended purpose of so much of it – in a way the tours will be a conversation. If people want to disagree with me, that’s okay.”

I couldn’t find any fault with Ben’s observations of what’s been done to the signage over the door of the old Eye Hospital – whatever trendy wine bar that has taken over have plonked a steel and glass canopy directly over the lettering. “It’s as if they’re frightened of you going in, ordering a drink and asking them to take a look at your glaucoma.” They’ve left the work on the corner of the building intact though, and being with someone with a fine eye for detail, I see an almost playful blurring of the letters. Can you imagine an eye hospital

While there is interesting type everywhere, Ben is most animated when discussing the old, the disregarded, ghost signs, and when it’s modern things it’s those that are anything but corporate off-the-shelf Gil Sans. He promises me “what [he] hopes will become [my] favourite piece of signage in Birmingham, but first we take a walk towards the Jewellery Quarter, and past a huge piece of graffiti acting as a sign for the café next to The Snow Hill. “There aren’t professional sign-writers so much in this day and age, you can either go and get something printed or ask some kid who does graffiti. Look at the time and care that’s gone into that, it’s ordered, planned, but that tiny bit organic.”

A building that Ben is enamoured with is the HB Sale building on the corner of Constitution Hill and Hampton St, it has fantastic terracotta lettering on it, and also had this brilliant bit of work in the window: It’s round the back of this, and past the painted signwork on the current premises of HB Sale, that we come to the wonder that is ‘Socks Direct’. It’s not often that someone tells me something about Birmingham that I didn’t have an incling of, but I did not know about Socks Direct. Now I’ll not get my socks anywhere else. The sign itself is interesting because it’s not standard in any way, we spend a geeky five minutes pondering if the Ss are upside down. In order to get my own back I tell Ben about the Henrietta St café as we pass, of how seventies rock star Alvin Stardust was a regular there in the late nineties for breakfast. Ben likes research to much and asks for evidence – I will find some, but I don’t have any at the moment.

Proving that not even we like walking away from pubs, we pop for a swift half into the Hen and Chickens where Ben talks a little more about his plans, amongst Channel Five and bizarre alterations to the bar – he thinks there’s enough of an interest in the tours, both type and more historical for him to keep doing them. “There aren’t typographical tours anywhere else in the country, and if people are studying type then they’ll be willing to travel. For the tours of buildings there’s a constant market of tourists and Brummies that are interested – I do one every Sunday now.”

Ben Waddington will be talking to Chinny on his BBC WM show on Sunday 14 October, between 2 and 3pm. And you’ll find an article and photos in this weeks Birmingham News.

Ben’s Guided Architectural Tour of Birmingham Buildings run every Sunday at 10am and “ a Thursday noon tour for noon-owls”. More info or tickets from the Central Library reception (0121 303 2323) or from birminghamboxoffice.com