There are eight million stories in the naked city. Danny Smith is always up for naked stories, so we sent him to the city. Turns out that this particular Commonwealth Games launch didn’t have any of the nudey volleyball.

The couple behind me have been talking since I arrived. Their accent is a cut glass received pronunciation I associate with a old flat mate from Kent, who would need putting to bed after two glasses of wine and once offered me money to wash his work clothes because he didn’t know how and did not want to learn. It’s getting close to seven and the full moon hangs in the sky with a buttery soft light that, coupled with the crowd’s excitement, adds to the atmosphere. The crowd is mostly families, a solid block of expensive walking anoraks and friendly dad beards.

Tonight is the start of the Birmingham Festival 2022, a nebulous collection of art events being held by organisations with the patience and resources to get through the byzantine application process. Tonight is acting as the beginning of the Commonwealth Games apart from the multiple ‘countdown beginning’ and other photo opportunities 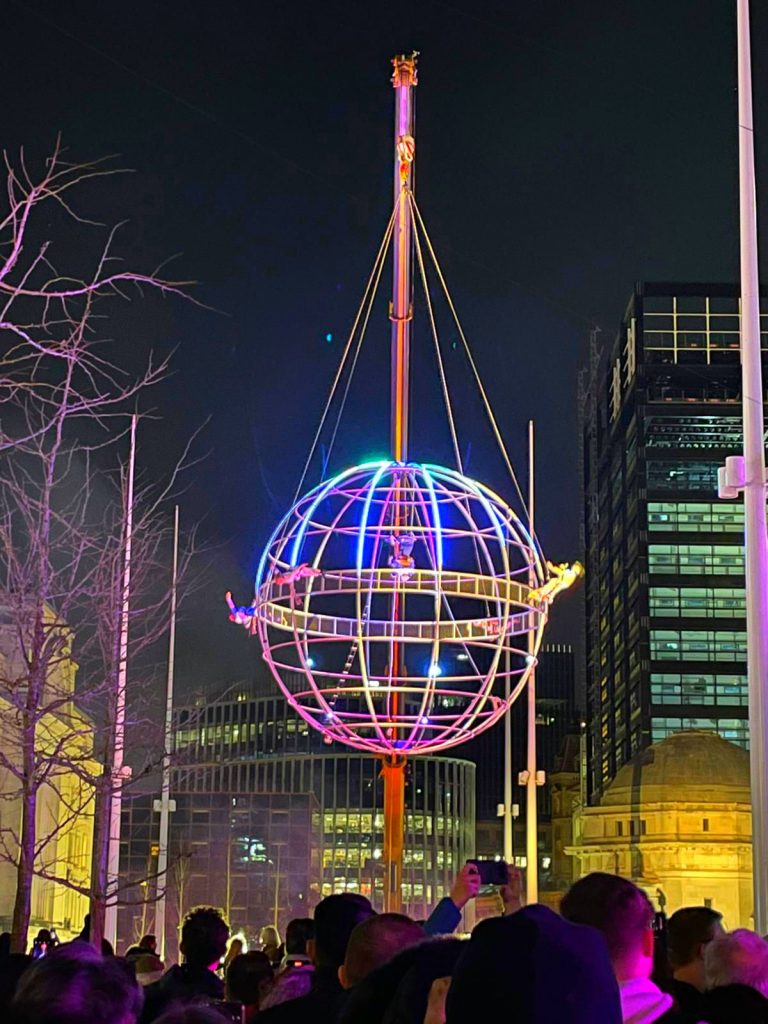 Ten minutes ago a boom operator climbed onto the side of a performance area about a quarter the size of a football pitch in front of a stage with a large screen. The boom arm is massive but the camera itself is tiny, three different families in earshot are having conversations about the size of this guy’s equipment.

“Ooo, it’s about to kick off” says one of the absolute Kents behind me

“Kick off?” says his partner in surprise, her accent makes it sound more like ‘kik oorf?’

“You know me, darling, always keeping things rugby,” he says back. I find myself grateful for small things, and the fact he didn’t say ‘rugger’ is enough.

He is indeed right, it is kicking off. The music swells and the spotlight follows three people that announce that they are The Past, The Present, and The Future of Stories, I think, I don’t remember because it’s never mentioned again and really bears no relation to anything that happens later on in the show. It’s ironic that a show called ‘Wonderous Stories’ has no real understandable narrative to it.

The spotlight falls on The Ghost Of Christmas Stories Yet To Be(?) who is dressed like a snowboarder who has just hunted and skinned a muppet, he then does a ten hour acapella rap that is a word gumbo of places, buildings, and all the other underlined words from Birmingham’s wikipedia entry which backwards and forwards over the line between impressive and tedious. This rap, (apart from the skyline appearing in some of the projections and a section quoting King Lear) was the last time the Midlands was mentioned. After the rap, the show falls into three, sometimes overlapping, things.

There is Impressive but, honestly, sometimes underwhelming high flying acrobatics suspended from a crane. The best of this was the grand finale with the performers swinging around a giant metal ball 40ft in the air, the worst of which was the artists slowly moving themselves around parallel bars that jut out the screen which had the air of a combination of bored teenagers titting about at the park and an extremely decadent sex thing.

Special mention goes to the two performers being slowly lowered on a zip line from the second floor balcony dressed as birds and pulling awkward ‘flying’ poses. 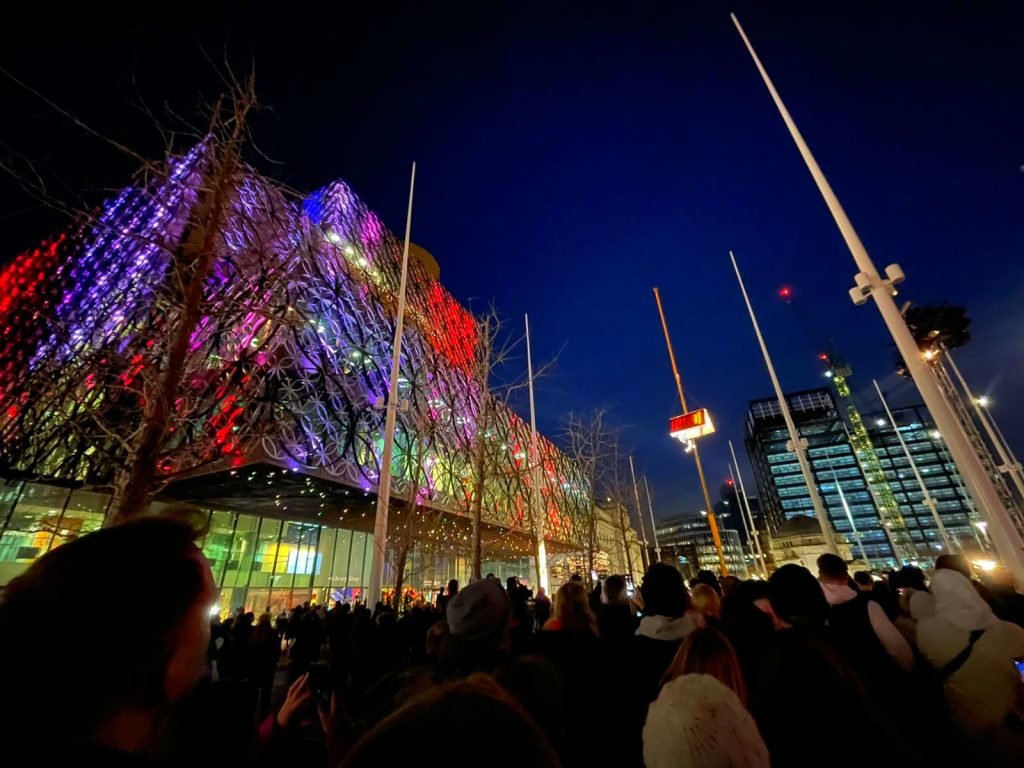 There are also performances in front of the projection screen, and, in some places when the performances and projection synced up, it looked quite slick. But like everything in the show they go on for about five minutes too long.

And then there were the floor shows, where all the performers, the professionals dressed as Doctor Who monsters with bright red dresses and book lamps as hats, the amateurs in double denim with massive QR codes on the back of them, and even the group of people that did a bit on stage inexplicably dressed in cheap bee antennae headbands and PE tabards. They come together in the space before the stage, in formation holding hands, spinning, and doing that thing where they walk in a line and cross over. It would look good from above I reckon, shame the guy with the boom has such a little camera. I half expected Frank Skinner to appear on top of an Austin Metro dressed as John Cadbury. It’s recognisable what they’re going for, but by inviting the comparison it can only fall short. Less opening ceremony 2012 more nativity at a medium-sized primary school.

But, time is made of moments and the more time I get through the more I learn that the ability to filter those good moments and focus on them is as close to what others call ‘happy’ as we ever get. The moment I will take away from last night was the visual that happened halfway through, four bikes suspended from the crane like a child’s mobile, the rider peddling languidly while throwing brightly coloured paper from the baskets, a nice image in itself, but looking over the road you could see the bikes shadows projected large on the front of the new HSBC building. A moment of surreality in an increasingly grim world It’s the moment I’ll keep, art being a shadow we cast on the faces of the corporate oligarchy collecting moments waiting for it to finish.

Look, Birmingham is at its worst when following others. Arguing for second place and bleating about the things it wasn’t brave enough to do first. The walk of Stars from Hollywood, the bull statue from Wall St, the name Grand Central from TV movies about American People, and the idea that calling a small bit of transport infrastructure ‘silicon’ can somehow encourage google to spend money there from California, and Dublin and London and Manchester and probably Quarry Bank with increasingly limited returns. These are facsimiles stacking themselves against the original. At its best though, Birmingham leads, its the city of Stans Cafe, Flatpack Cinema, Supersonic Festival, raw and brutal rock and roll and razor sharp grime. We’re better than a knock off ten year old Olympics and the inevitable crushing comparisons. Birmingham has the opportunity to finally tell its own stories on the world stage, I just worry about what we’re trying to say.