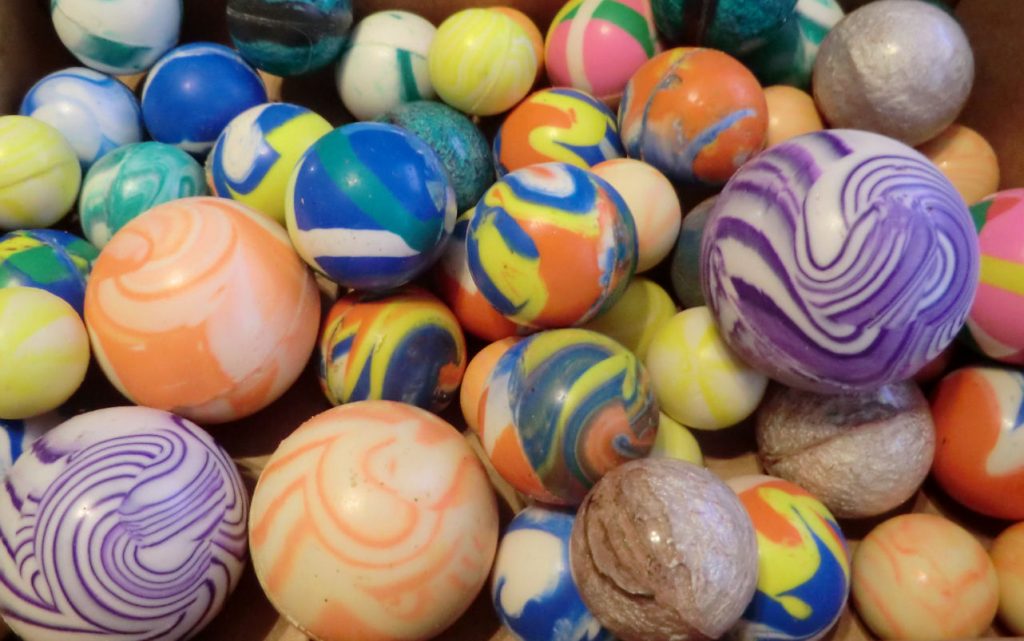 At school, that term, or at least that week, the obsession was small rubber balls, an inch across and patterned with a muted tie-dye, with a thin piece of elastic through them which was tied to a plastic ring. The elastic stretched around – I’m now guessing – six to ten feet, the balls were very bouncy.

No-one ever took toys to school, I don’t know if they weren’t allowed, but it didn’t happen. Once a kid brought a Beano in and there was a whole line of nine year-olds sitting on the brick line at the edge between the playground and the grass looking over their shoulder. We mainly played games that involved running, in different combinations. It wasn’t until I moved from the Churchill Road ‘annex’ to the big school up the road that we played football. And even then it was football if we had a ball, football with a can, or a stone, or sometimes even just our minds. Sometimes if there was nothing round ‘stick rugby’ was the game. Stick rugby was just throwing a stick around and running into people: none of us knew the rules of rugby.

The balls, were a break with the tradition of aimless games of tig and tag, or kiss chase. They were sold in the shop at the top of the road our school was on, on the corner with Hamstead Road, a old mock-Tudor house with only the front parlour space open as a shop. Ice cream freezers outside in the summer and metallic plates advertising the Evening Mail covered in a wide mesh to hold the days headlines.

I usually caught the bus home from the stop roughly opposite the shop, a little further down where St Mary’s church graveyard met the edge of Handsworth park. And that was part of my plan. For some reason I’d walked with someone else to the next stop up after school a few days before, and noticed that they paid 10p when I usually paid 15. It was further to that stop, and across the main Wellington Road island.

The balls were everywhere and I really, really, wanted one. And then I found 5p, either in my pocket or on the floor. It could have been a one shilling piece, which you would always check that it wasn’t one from pre-1920 as they had more silver in, but I don’t remember. If it had been I would have kept it to give to my mum, although we never found one and I’m not sure anyone knew what to do with them if they found them. But 5p meant that I was only another five short of a ball.

They came in tiny plastic bags, the elastic carefully wound. You eventually had to let the ball drop and it jerked hike a hanging cowboy from a gallows tree. I got mine on the way in to school. I’d got two lots of 15p for my bus fare in and back, and I realised that if I went to the Wellington Road island stop on my way back I could pay just ten pee, and have ten for a ball.

It may not even have lasted morning playtime, I’m not sure I had it at dinnertime. I don’t think it was in the pocket of my scratchy grey trousers as I walked up to the stop.

It hadn’t been long since I started getting the bus on my own, my Dad used to work in Handsworth a little further along the line and he had used to time his work so he would meet me at the bus stop after school, smelling slightly of oil and sweat and dad as I stood close to him. To start with this meant him getting off and being able to wave me across the main road, and he would then dazzle and annoy me with his ability to predict when a bus was coming.

Eventually I got it out of him and discovered that he could see over the wall at the end of the curve of the road and through the trees, spotting the 16 as it came way before I could.

But by getting off, Dad was having to pay twice. Money was tight, and in the school holidays he’d often walk the three miles to work, in his toe-’tectors and old flared jeans, and that getting off was unsustainable, so we tried a system where he would stand up and wave to me from his seat and I would get on the bus that I saw him one.

Eventually I got that wrong and ended up on the bus alone, and walked from the stop at the other end to my nan and grandad’s, where we would go after my school day to pick up my sister who had been collected by Nan from her school which was nearer to our houses. I was scared all the way home, and hugely relieved when Dad turned up at the door ages and ages later. That was proof enough that I could catch the bus on my own, so I graduated to making my own way and Dad stayed at work for an hour longer at day when there was overtime.

Which meant I was free to make the decision on the ball. And I walked up to the other stop and caught the bus.

There were two layouts of bus running on that route at the time, one slightly older and metallic inside. That type had a bench seat for three people facing the stairs just next to the door. It was raised up to level with the driver and was by far the best seat. I paid (“10p please”, despite being asked to ‘Please state destination’ by the sign, everyone would announce the fare to the driver, as it was easier for them) put my single coin in the slot, bent the ticket out of the machine’s lips, stepped up and sat.

One of the delights of the side-on bench seat was, and remains, not having to ask people to move when you want to get off. Timing that small embarrassment has always worried me. It doesn’t seem to happen now, but we always tried to be ready to get off the bus, standing just behind the driver, noticeable but not distracting, in good time for the stop. When the bus was picking up speed that was hard to judge, and if it skipped a stop, not having to regain the momentum it was all the more difficult. Going down Hamstead hill was one of those times, the driver would be heavy on the brakes, the gradient making stopping at the fare stage halfway down difficult and you could tell that no-one wanted to. The thick trees would rattle against the upstairs windows, the brakes would be squealing.

The bus stopped, there was no-one to get on. The driver turned his head to me, balding, with very dark hair above his ears and only there.

It was three or four stops before home.

The driver knew which stop I’d got on, knew which one I usually got off, knew what I usually paid. He was going to enforce the rules. I was absolutely terrified. I didn’t think about it being OK to walk down the hill and home, I was just scared that I’d been caught, or caught out. I shook as I stepped down and across to him, he’d opened the doors.
“This is where your fare takes you.”

The next time I got on a 16 that he was driving, he remembered. Heavy blue jacket, light blue shirt, expression unmoving like a Guess Who picture.

He continues to haunt my bus-based nightmares.