Local satirical miscellanies, so the mainstream media says, are not doing enough to get out their core constituency for the Remain vote.

We want to, we really want to. But a harder question than the one on the ballot is: is it possible to be funny about it? Sure it’s possible to do tiresome Python-referencing knock offs listing the shiny buildings we’ve built and placed plaques with european stars on them. But the rhetoric is dire, self-satirising, and so far removed from a rational debate that it’s hard to get purchase on.

The EU isn’t perfect, but it does provide some safeguards against the worst excesses of neoliberal capitalism – especially regards workers and individual rights – and of course the Brexit line-up is full of the worst of all people. 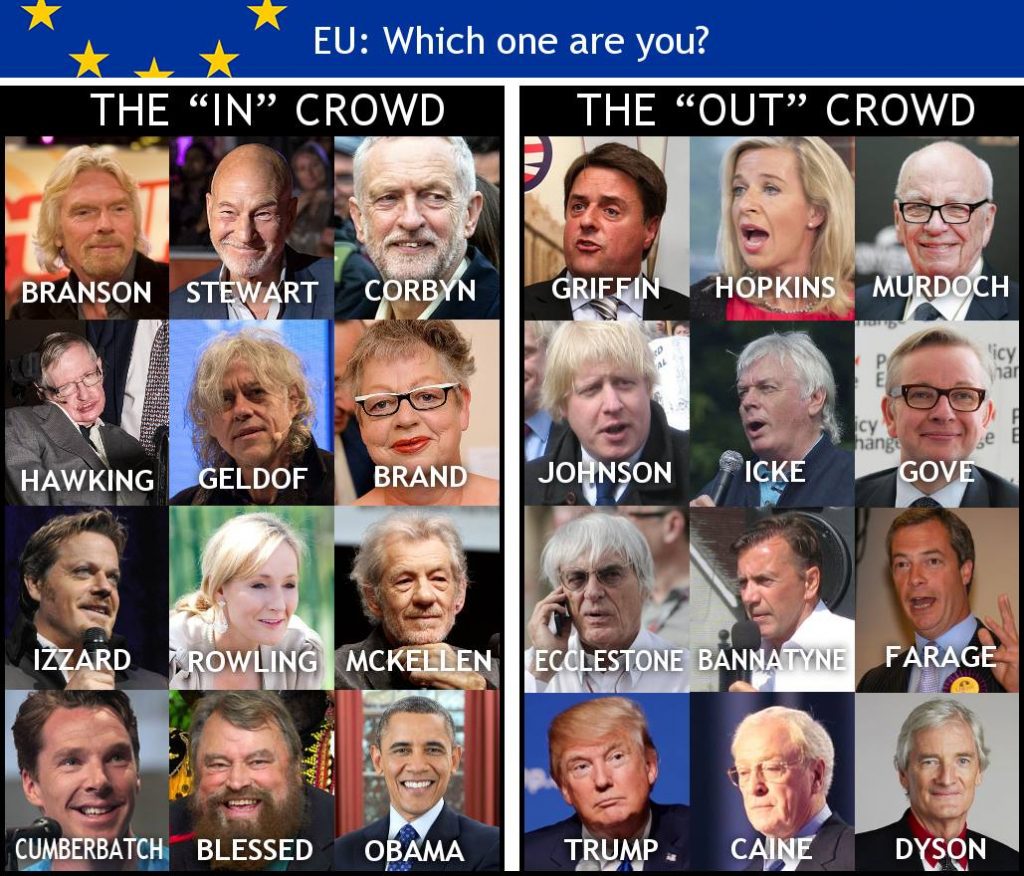 There are absolute arses, both political and non-, on the remain side too. Dick Branson will dismantle your health service around you for profit and wrap himself in the union flag to keep the dust from his flowery white shirt. George Osborne, well you know what he’s done for Birmingham: cut everything. So, that’s not exactly a robust defence of the EU, and how does it all apply to the second city?

The latest trope from the leave camp is to promise that all of the money that flows to the UK from the EU will be spent in ‘exactly the same way, but better’. That’s the sort of in-depth political thinking we’ve come to expect from Liam Fox et al. But do you trust the UK central government – especially a Tory one for the next four years – to spend that money equally on the Midlands? We’d advise you not to.

The EU needs reform, but as a region we’re ill-informed and forced into situations where we are unable to take advantage of what it offers. If the Tories hadn’t closed the regional development agency that moved that european money to the right places in the country and replaced them with the unaccountable ‘economic partnership’ there would have been more money to spend.

The key question: what does it mean to be the youngest and one of the most multicultural cities in a country where power could be centralised in the hands of insular old white people? If polls are to be believed then the younger population of Birmingham will vote to stay: but will it be enough? What happens to make sure we get fairness within an isolationist UK whose leadership will know that we would never vote for it? Don’t forget, not only are we northern but we’re a majority red city — it’s only the wantaways of Sutton Coldfield who vote blue in Brum, and they have form with in/out referenda after last year’s “Sexit”.

If you have any sympathy with the argument that says that the EU is the mainstay of 70 years of peace and post war consensus which the UK was largely responsible for building then you should vote remain, if you do this whilst identifying as a Brummie (or someone from “the north” or “the regions”) than doubly so as you paid the price for the elites then and you surely will again if the collapse of that consensus leads to sabers rattled. But it won’t take a world war for Birmingham to get hit. The most deprived areas have borne the brunt of local government budget cuts [Source: Joseph Rowntree Foundation], cuts that are self-imposed by a country voting for austerity-focused neoliberals. The most deprived local authorities have seen cuts of £220 per head, compared to £40 per head in the least deprived, Birmingham has to cut £250 million from its budget by 2020. Be aware that whatever cuts are made to rebalance the economy after the inevitable Brexit monetary crisis will affect you much more than they affect the rich.

Compassion from a Johnson-led government for cities outside the capital will be harder to find than, well, a Capita contract.

If we leave, what does it mean for manufacturing jobs that rely on exports? That’s not at all clear yet but what we do know is that now, inside the EU, Jaguar Land Rover has made huge investments and our old industries are just starting to revive. Why risk that now? And as for the service industry, our award-winning baristas will have to can the latte art as a post-european Birmingham will think Mellow Birds in a cup is a posh coffee.

If Brum is an island of vibrant diversity in a sea of warm beer, trendy-ass craft or not, what happens to our culture, or our fair share of funding?

If the Brexiteers take power, we warn you: don’t be young, don’t be a woman, and don’t be from Birmingham…