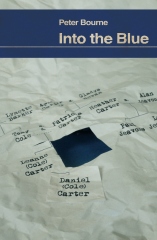 Set against defining 1980s events like the Falklands War and the Hillsborough disaster and the ever-changing landscape of Birmingham, Into the Blue is the story of a family tree decayed by betrayal, revenge and suspicion. More info here, or buy on Amazon right now.

Carl’s a man of few words. And even fewer on the telephone. The Talking Clock has a wider range of conversation. Carter has never been able to digest his father-in-law’s slow, ponderous and thick Small Heath accent without diverting his brain elsewhere. If Carl was an animal, he’d be a city pigeon. If he was an image, he’d be a monotone visual of a 1980s roundabout. If he was a sport, he’d be crown green bowls. Carl informs Carter with loveless precision that his mother will call him back and let him know if Wednesday night’s suitable. Carl does his pools run on a Wednesday followed by two pints of piss in The Green Horn in Redditch. The one night of the week Carl leaves the comfort of suburban bliss, aside from the twice-monthly trip to the Chinese with Pat. An occasion where Carl doesn’t need the menu. He’s found what he likes and sticks to it. Carl’s a tedious creature of habit.

Carter’s not spoken to his mom. She sent a rushed and misspelt text saying Wednesday was convenient enough. No expression of surprise at her son’s first visit since Christmas. Carter decided to take the car in case alcohol forced him to spend the night over in Redditch. Redditch, home of the needle. Carter never understood his mother’s reason for moving over there. Except her desire to be isolated from the past but in the same laborious comfort zone. Other Brummies move to Spain. Pat moved to Redditch. It’s as far as Carl Frogatt could ever venture. Carl Frogatt, who’s never been abroad. Well, only once. To the Costa del Sol. Never been to London. Once described The Grand Canyon as an overrated pothole.

Pat’s working part time now. Got a job in a shoe shop in the Kingfisher. She’s well-liked by the customers. Pat does small talk. Very well. Carl got a large redundancy pay off from Rover. His attitude is to keep as much of it for the next life. Don’t waste it now. Never know if you’ll need it. Money’s gone on a new fence, lawnmower and golf clubs so the cash is enough to keep Pat and Carl in their turgid, B-road to grave existence.

Carter’s feelings always go through the same schizophrenic curve before meeting his mother, a marked downward curve of trepidation and a small incline of nostalgia and hope that they might draw some kind of pleasure in each other’s company. Feelings which have no inbuilt justification, given the lack of attention and love his mother has lavished on him as an adult.

Rockets Road is in Revolutionary Road-esque suburbia. Thirty-eight identical semi-detached red brick houses with near perfectly mowed lawns and immaculate cream trimmings. Most of Carter’s time in the house has been spent over Christmas, a period of the year when Carl is at his uninspiring best. The near bald Xmas tree stands in the same spot every festive period, with polished golden baubles always an equal distance from each other. Carl doesn’t get much done in life mainly due to the excruciating and tedious precision he insists on every task. His existence is drawn out and time consuming. No rush to pack in every last minute. The festive dinner menu is always the same: bland, taste and condiment free, everyone receiving exactly the same number of sprouts and every piece of turkey cut almost identically. Carl treats spice with the same disdain that the police treat Class A drugs. The house is charmless. The off-white fluffy carpet that dominates the living room is always pristine, the very few books which lie slanted on the under-used drinks cabinet, housing a mere bottle of Scotch Carl once won at a golf tournament, are dedicated to vintage cars and fairways and adorning the walls are those dull paintings of scenes from village pubs.

Pat seems mildly indifferent to her son’s arrival. She’s on the blower talking to a friend about a cinema date and sharing an online order for anti-ageing moisturiser. Carter reclines in Carl’s cherished lazy-boy and spitefully completes The Daily Mail crossword which Carl treats himself to following his two pints of piss. Enough to knock him off his schedule for years. Carter’s never understood what his mother sees in Carl, and nor perhaps what Carl sees in his mother.

For all of Carl’s failings, Carter feels he deserves someone equally as tedious and mediocre rather than a bitter, aggressive, hyper, loveless woman like his mother. Carter always wondered whether behind closed doors they devour a common passion for 1950s Italian neorealism films and gorged deliveries of Châteauneuf du Pape and collections of world cheeses, marking off what they’d consumed in their Oz Clarke wine book, before tying each other in leather straps and embarking on all-night rogering. He preferred not to understand the attraction or what secrets might lie behind the immaculate white door of number 37 and its polished brass knob.

Arthur’s babbling on about the strikes. Schizophrenically cursing and rambling. Tory bastards. Spineless Callaghan. Miners. Power workers. Firemen. Hospitals. What about the railways? Run your own trains on those wages. Twenty-five years. Up and down the country. Across the Midlands. Never a sick day. Never a shift Arthur’s not showed up for. Fuck the bastards. Winter of discontent.

Gladys’s not had a pay rise in five years. Five fucking years. There’re always younger girls who’ll work for that pay. That’s what they say. Fed up Gladys. Face as long as Livery Street. She’s been reminiscing. Thinking back to the days on the campsite. On the beach. Always sunny when she thinks back. Carefree. Before things turned. Before she met a squat, charmless train driver from Erdington. Twenty-two years later. Same job, same hours, same shite pay.

Gladys is preparing Welsh rarebit. Arthur’s partial. Arthur’s slumped in front of Mastermind. News with Richard Baker. Got up. Switched over to ATV. Charlie’s Angels on. Arthur likes a bit of that. Likes the eye candy.

His own angel getting ready. Hev’s heading out for a date. Arthur doesn’t know it’s a date. Arthur’s favourite. Always been as good as gold. Not like her older sister. Nothing but trouble, that one. One blow job away from becoming a slut. Arthur thinks she’s off to meet Pat. Hev’s been through a few guys recently. On the quiet. Not as many as her sister used to disappear into the night with.

Arthur’s not approved of Pat sleeping over at Tony’s. Tony at his parents in Smethwick. Boxy, messy little house. Despises the Coles, does Arthur. Rough, dishonest folk. Would steal the laces from your shoes. Arthur’s putting a deposit down for a place on Wilton Road. Keep them close to home. Away from the Coles. Tony’s working as a mechanic over in Smethwick. Does the TA at weekends. Talking about joining the army for good. Even the navy. Using his engineering skills. Tony’s good with his hands. And not just in the pub. Good money and adventure for a few years. No danger of too many wars right now. Arthur’s not keen. Not a big Tony fan. He’s told Pat. But Pat’s happy. Gladys thinks everyone should be given a chance.

‘HMS Coventry Is Sunk’. Sister ship of HMS Birmingham. Twenty deaths estimated. Al’s hoping Hermes is going to be blown up. Sunk. Tony with it. But Hermes is not even in the action. Tony got the easy gig. Al’s fidgety. Quick pint in the Hibernian. Quicker chaser. Jameson. About to head out. Then over to Tommo’s to watch the Villa lose. Villa can’t win. Not tonight.

Brian Moore’s waffling on. Butler’s up and down. Shouting at the TV. Come on, you fucking Krauts. Payback for fucking bombing the shit out of us. Caught between a rock and a hard place. Villa against The Krauts. Can be no winner. Rimmer’s off. Creaked his neck. Spink’s warming up. Spink’s on. Fat fuck. Who the fuck is Spink? Butler’s spitting out his chips. Butler’s got his fist raised. Butler’s shouting Spunk at the TV.

Bayern are pressing but Spink’s equal. Butler’s thrown his can at the TV. Gavo’s having a joint. Tommo’s got his hand down his trousers, massaging his nuts. Spink’s saved from Durnberger. From Rummenigge From Mathy. Villa have done fuck all. Villa are going to lose. Villa can’t win the Big Cup.

Bayern are dominating. Durnberger’s close again. Breitner’s running the game. Not seen Morley. Not seen Withe. Villa are not going to win. Villa are being outplayed.

Swain’s cleared off the line. Hoeness has missed a sitter. Villa are doing nothing. Al’s had a few drags on the weed. Boys want to get some action later on. Al’s not keen. Al’s had enough for one week. Al’s on his sixth can. Lost on the weed and the beer. Villa can’t win.

‘Shaw, Williams, prepared to venture down the left. There’s a good ball in for Tony Morley. Oh, it must be and it is! It’s Peter Withe’. Peter fucking Withe. Room’s silent. Gavo’s dropped his can. Peter fucking Withe. Fucking Krauts. Good for nothing. Tommo says he’s going out for a hard shag. Butler’s moaning. Xenophobic babble. Butler doesn’t know who he wants to lose.

Bayern have scored. Roar of cheers. Linesman’s got his flag up. Last chance. Ref blows on his whistle. Villa are the crème of Europe. Tommo’s dashed at the TV. Switched it off. Lights out. Everybody out. Boys going for a fight. Not Al.