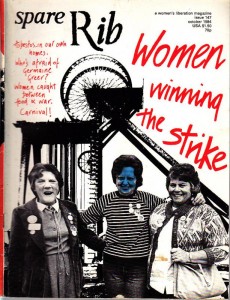 Hmmm – what to read…? Celebrity cellulite hell; top-ten handbags-to-die-for; how to bake the perfect chocolate cheesecake; how to lose 15 stone in three days; how to perform the perfect blow-job; how to maintain the will to live….

Amidst today’s flim-flam of celebrity, lifestyle, fashion and beauty publications consumed by much of British womanhood, there does exist progressive, political, publishing on women and their rights: and it is Birmingham, through one of its own daughters, that can proudly take the credit.

Long before there was Spare Rib (the late-lamented tribune of 1970s British second-wave feminism) there was The English Woman’s Journal (1858-1864). This pioneering periodical was co-founded by Birmingham lass (albeit quite a posh one), Bessie Rayner Parkes, who was born in the city in 1829.  Her affluent, middle-class parents were Joseph Parkes, a solicitor of a radical political bent, and Elizabeth Rayner Priestley, granddaughter of scientist, philosopher and Unitarian minister, a chap you may have heard of: Joseph Priestley.

The family decamped to London in 1832, and then in 1847 to Hastings, where Bessie met Barbara Leigh Smith (later Bodichon) who became her lifelong friend and with whom she would later co-found The English Women’s Journal.

Both women were thinkers and campaigners. In 1854, Bessie published her Remarks on the Instruction of Girls, on the need to broaden women’s education to enable them to participate more fully in public life, and Barbara published A Brief Summary of the Laws in England Concerning Women, which resulted in 1857 in both women lobbying (unsuccessfully) to have parliament pass a Married Women’s Property Act.

They founded the Journal the next year, publishing a mixture of political, social and literary content which reflected the social causes in which they were involved, and their determination to improve the lives and status of women in society. It was edited by Bessie, and supported by other proto-feminist activists of the time, who, from the Journal’s offices ran The Society for Promoting the Employment of Women, with its women’s employment agency, and related training schools, and campaigned on issues of women’s work, suffrage, legal rights and education. Alright it’s not diving under a racehorse, but this is pretty radical stuff.

In 1864, however, ongoing internal divisions between the Journal’s chief supporters, ill-health on Bessie’s part, and financial pressures all combined to bring about the end, and the Journal was dissolved. (In true publishing fashion, though, the title was amalgamated with another the next year – Alexandra Magazine – which morphed into yet another – The English Woman’s Review – which continued in print until 1903, when it probably became Razzle.)

1865 saw the publication of Bessie’s Essays on Woman’s Work, some of which were taken from the journal. The collection constituted a plea for more fulfilling lives for middle-class women, and for better conditions for working women. Rather sadly, perhaps, at least to modern-day feminists, this was more or less the end of Bessie’s active involvement in the women’s movement. She converted to Roman Catholicism in 1864, married Frenchman Louis Belloc in 1867, living in France for many years, and died in Sussex in 1925. Although she continued to write, mainly poetry and reminiscences, it is for her championing of women’s rights through the written word that she will be remembered. Oh, and being mother to poet, troublemaker, and we learn, Brummie: Hilaire Belloc.

Today, no campaigning women’s rights publication aimed at a general readership in the UK currently exists (an attempt to regenerate Spare Rib as an online, crowdfunded journal lasted only from October 2013 to July 2014), and media reporting still tends to reflect the male experience as the norm, women’s rights issues are much more visible in the mainstream media. Moreover, in academic circles, there are numerous journals that adopt a feminist standpoint on a variety of subjects, contributing to scholarship and learning, and informing women’s rights activism across the globe.

Bessie, a product of Birmingham’s 19th century liberal middle-classes, created, through her Women’s English Journal, the progenitor of contemporary feminist publishing. And perhaps we can even see a nod to the power of the feminist word in the let’s face it, usually mendacious, claims made to the ’empowering’ nature of the new lipstick/dress/botox treatment/lap-dancing lesson that most of today’s women’s periodicals are trying to flog to us. She too had a lighter side, publishing in 1898 as Bessie R. Belloc, the no-doubt hilarious but sadly out of print Historic Nuns.