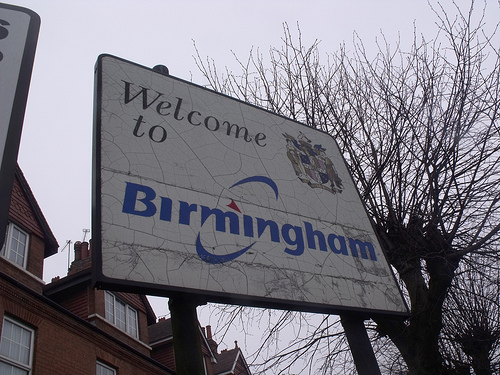 The Bearwood Question is an idea I coined a while back when writing about local media policy – but bear with me it’s much more interesting than that!

Bearwood is a lovely area of the West Midlands that I’ve lived in a number of times. It sits across a local authority border and manages to not quite be in Sandwell and not quite be in Birmingham. When I lived there I looked to Sandwell for local government (well, if I’m honest mostly for bin collections and street lights), and to Birmingham for my cultural and social life. To all intents and purposes I was living in Brum, but I was paying a much more favourable rate of council tax for those street lights than I would have been just down the road. It was like living under some sort sort of flag of convenience or being a council tax exile. This is the reality of life on Brum’s fuzzy edge, and it speaks, I think, to our tendency to argue with ourselves about place: we are pulled in various directions through a tension of civic, emotional and cultural life.

Years back over one weekend two hashtag games emerged on Twitter that were based on this sense of place. #brumsouvenirs revolved around wordplay on Birmingham place names; the aim to come up with a souvenir idea that reflected the place name (the game was originated by Pete Ashton, who collected the greatest hits on his blog). The second game was #doesntmeanyourbrummie (sic), started as a response to the #doesntmeanyourblack meme (see, the grammar is fine, it’s part of the joke); this tag was about uniquely Brummie experiences.

Each game threw up border disputes pretty quickly, such as:

I once proposed a Birmingham update to Godwin’s Law. Godwin’s Law is an Internet adage that states:

As an online discussion grows longer, the probability of a comparison involving Nazis or Hitler approaches 1.

To that end I suggested a Brummie’s Law (I’m not naming it after myself):

As an online discussion about Birmingham grows longer, the probability of a boundary dispute approaches 1.

At the heart of Brummie’s Law sits the Bearwood Question, the quintessential distillation of the city’s fuzzy edges: what does local mean if you live in Bearwood?

Editor’s note: yes essentially this was a “flashback episode” made to pad out the series cheaply – we hope you’ve enjoyed our City Limits edition. Oh what you don’t know what we mean? Well go here and see!

Pic: Welcome to Birmingham sign, Bearwood / Sandwell Border – CC Elliot Brown. Elliot notes there is no welcome to Sandwell on the other side. Still, the council tax is much cheaper.