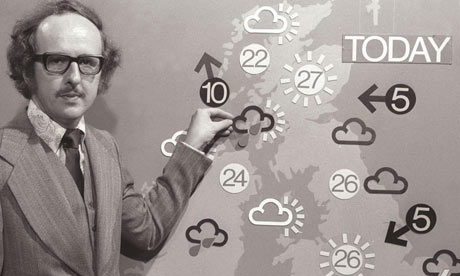 “Earlier on today, apparently, a woman rang the BBC and said she heard there was a hurricane on the way…well, if you’re watching, don’t worry, there isn’t!”

Oh, Michael Fish you were a weatherman. And so was John Kettley, and so was Bill Giles, and so was Ian McCaskill. And with one slip of the tongue and your magnetic cloud things you failed to prevent Britain being warned of a storm that nearly killed Rene out of Allo Allo. This really is one for the teenagers, who with their smartphone weather apps know that it’s bloody hot right now without even needing to look up. Magic. We used to have to take the word of some amusing suited men pointing to bits of Scotland.

In January 2007 Blues needed to re-lay their football pitch. Thrifty as ever they bought second hand: a pitch going spare from the new Wembley Stadium. The club consulted John Kettley on the weather for that week who predicted there would  be the average amount of rainfall. The torrential storms washed the pitch away.

And if this piece isn’t taking you back into the past enough, let’s look at where ‘the weather’ comes from. Is it round here, maybe? Well,yes: the use of weather charts in a modern sense begin in the middle portion of the 19th century and Birmingham’s Sir Francis Galton created the first weather maps in order to devise a theory on storm systems. These were printed in the papers, and people loved them—leading to the way we get weather information right to this day.

Brum, phew what a scorcher.