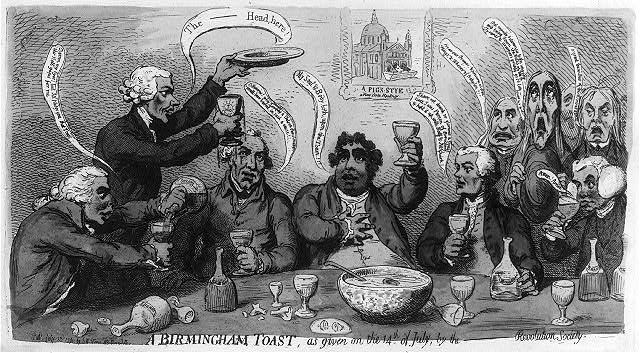 Once, Birmingham had a scene. For a hot minute, somewhere between 2008 and 2009, it found something. And then we fucked it up.

By way of example, remember when the Birmingham Bloggers were a thing? I know there’s technically still a Facebook group or whatever, but it’s not like it was in 2008-09. With that group of awkward nerds came the sharing of knowledge and the birth of creativity; the kind of ideas that start from pub chats, or from blog posts or even single tweets. The ‘wouldn’t it be cool if’ ideas, like building cocks in the snow, or running a 5k at midnight, or sitting on the #11 for a day. Or even coming to a pub to hear some interesting people speak.

I think there are two problems at play in this city. For one, the social media scene got fucked up because all those with the best ideas went off to seek their fortunes, and the ones who were taking notes started charging people.

The other problem is that Birmingham exists as a set of cliques. And if you’re one of those who doesn’t think that’s the case, you probably had a great time at school and felt just awful when that kid was being bullied but what could you do?

If you stood by and watched someone pitch an idea, or read about an upcoming event that wasn’t sponsored by an email newsletter or a “hub” of some kind, and you knew who that person was and you did nothing to help pass that information along to your clique, you are to blame for the insipid, dull, self-congratulatory, gin-soaked, burger-fetishising, hipster brewery, faux indie bag of wank that we call Birmingham.

You are to blame for the ideas that came and went. Not for the shit ones. We’ll cop the flack for those. We’re to blame for writing insular thinkpieces or purporting to ‘serve the community’ while only serving ourselves. We’re to blame for complaining about how other people talk about the city because they don’t use the right reference points or they get the memes wrong.

But if you ever passed on an event, if you were ever asked to look at something and tell your followers, readers or circle of friends about it and you didn’t, because you weren’t getting paid to, or because it came from people who ‘don’t get it’ or because they’re “not connected”, you’re to blame. I hope that some of the people I’m picturing are reading this, and I hope you feel fucking ashamed.

It’s people like you who are turning Birmingham into a city of awards. Of bland platitudes. Why? Because we don’t “blow our own trumpets” enough? Or because you’ve found the easiest way to make a few quid?

You might guess from this piece that I tried to run an event. I’ve tried a few, but I really thought this one had legs. I thought that, with the backing of an incredibly generous and supportive – if expensive-to-drink – venue would be enough. And it very nearly was. We got a few events out the door, each with disappointing numbers, but by the skin of our teeth we got there.

We battled through students who thought nothing of bailing at the last minute because, well, students. Or contributors who’ll book an appearance and then split the second a paid gig comes along. Or volunteers who get pissy when you ask them to adhere to deadlines you’ve already pushed back three times to accommodate them.

But I worked through all of that. I paid money that could’ve gone to my mortgage on equipment, and to buy the beers to say thanks to those who turned up. I got up at 5am so I could write emails looking for sponsors and speakers 3 hours before I had to go to work, or took a 90-minute lunchbreak to have an event meeting, or stay up so I could work with each individual contributor on their content. I did all that, and gladly.

And then I asked you. I asked you to help me. Just to spread the word. Just a mention, a few words of your own that didn’t just involve you hitting that little retweet button. Something to say “this is good, you should go to it”. Something that leveraged your contacts, your friends, your families. Something that tapped into your cliques.

You, who’d been to previous events. You who knew me personally and knew how much this meant to me. You, whose events and projects I supported and championed. You, who got tickets and never showed up because why bother, it’s free. You who were helping put the thing together or speaking and couldn’t think to ask your friends to come.

For a moment, Birmingham was cool. Then we swapped talent for money; swapped ideals for beer blogs; swapped impromptu gatherings for twibbons.

Congratulations Birmingham; you’ve got what you wanted. You now have the culture you deserve, and you can finally blow your own trumpet. Well done.

Mark calls himself an independent digital content producer, because he thinks that will mean people will want to pay him to make podcasts and games for the web. View all posts by Mark Steadman