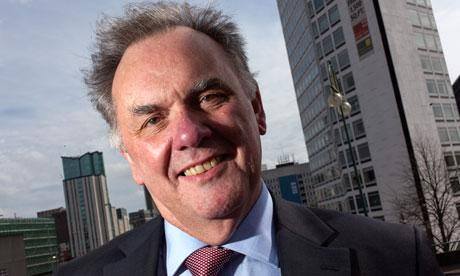 Duran Duran get pilloried for claiming, on their 1995 covers LP Thank You, that ambulances won’t come to their houses because they are black. But they’re right, try to dial 911 from South Birmingham of the late ‘70s: it’s unlikely that any of the emergency services will turn up.

It’s also true that if you phone the Capita-run call centre for some bin bags or to pay your council tax it’s likely you won’t get anything useful. They’re not discriminatory, just a bit crap – hamstrung by both council bureaucracy and  inertia driven by the commercial profit motive.

And while Sir Albert Bore didn’t sign the Capita contract (that was a Tory/Lib Dem joint production back in 2006), he is judged for presiding over the aimless ‘looking for it’ that followed. In an era that started to demand big personalities and decisive action, it was all too easy to assume that Sir Albert’s reticence to ‘find’ the contract was nominative determinism.

“Solihull’s council leader is way more exciting, even if the place is cold and he’s sliding downhill.”

But he is no longer with us, and in an era when any council leader will be subordinate to a West Midlands-wide figurehead, Albert Bore must serve as totem for Birmingham.

Albert’s successor, John Clancy can hire all the local political journalists that Birmingham has and turn them into his PR people — it would only take one more to have got them both, after all — but that’s just par for the course in the post-truth world. Any future Birmingham council leaders will struggle for legitimacy, for they will be seen against the directly-elected mayor who will have one of the largest mandates in the country. If the local Labour party continue to insist that the leader is selected by councillors only, this will seem even more obvious.

Clancy seems like John Major in 1992, brought in to run the clock down — a night watchman, trying to hold back the bouncers until we see what happens next, holding a torch to look for the Capita contract but only able to look at some of it at any one time.

The leader of Birmingham City Council will continue to be the city’s most powerful person that the city has never heard of. That’s why we need Albert Bore, every day. Not incompetent like Mike Whitby, but unseen. It can be said that the only way to hide a council’s operation is to display it in plain sight, the only way to see how quick the operation moves is to stare at it not moving.

When we elect our new mayor it must be in this same spirit: watchful and alert. One slip and we could end up knowingly undersold, colluding with a central government that sees devolution as a buck passing exercise. The buck being delivering essential services and the passing being a sleight of hand trick: the choice being who has to tell people that those services are no longer essential.

Look at the same photo of Albert Bore every day, and hold those candidates to the same scrutiny that you give that photo. Is the nose reddening from the cold wind around Alpha tower, or is there something else going on? Metaphorically, is the smile real? Are you being distracted by the name, the campaign? They are a member of a party, check what they say against what the party stands for, has stood for.

This winterval, remember that Sir Albert Bore is a gift that keeps on giving, every day.
Download the Same photo of Albert Bore every day calendar for 2017 here >> 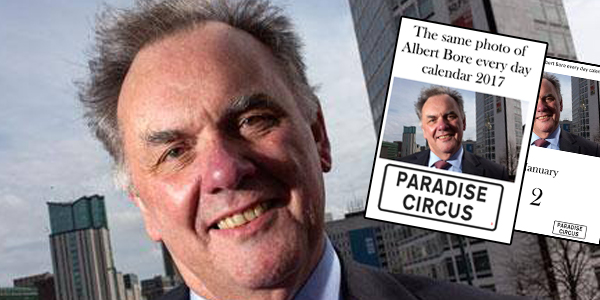